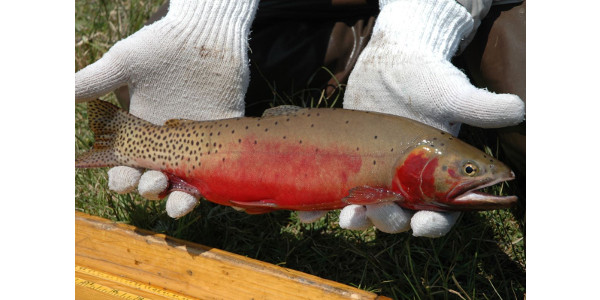 DRUANGO, Colo. — In the continuing effort to restore native cutthroat trout to state waters, Colorado Parks and Wildlife and the National Park Service are cooperating on a major project set for late summer in Great Sand Dunes National Park and Preserve.

Two public meetings to explain the project are scheduled: 6 p.m., May 20 at the Rio Grande Water Conservation District office, 8805 Independence Way in Alamosa; and 6 p.m., May 21 at the library in Westcliffe, 209 Main Street.

“This is a challenging project, but it will provide ideal and protected habitat for these fish,” said John Alves, senior aquatic biologist for CPW’s Southwest Region. “We appreciate that the National Park Service shares CPW’s goals to re-establish native cutthroats in the waters of the San Luis Valley. Trout Unlimited is also working as a partner on this project.”

The project is tentatively scheduled to start the last week of August. To re-establish the native cutthroats, the lakes and creek will be treated with Rotenone, an EPA-approved organic chemical that has been used for decades in Colorado and elsewhere for aquatic management projects. The chemical will kill all the non-native trout. If the treatment is successful, the earliest the area could be restocked with Rio Grande cutthroat would be the fall of 2020.

The Sand Creek area will be closed to public access during the treatment project.

CPW, the National Park Service, the state of New Mexico and Native American tribes have been working to re-establish Rio Grande cutthroats for more than 20 years. Currently, the cutthroat can only be found in about 11 percent of its historic habitat. Mining, water development, intensive land-use and over-fishing have caused the trout’s populations to decline significantly during the last 100 years. Conservation groups have asked the federal U.S. Fish and Wildlife Service to place the fish on its threatened and endangered species list.

“All the agencies involved in the restoration are working diligently to make sure this trout is not listed. This restoration project is just one of many that will be done in the next decade,” Alves said.

The Rio Grande cutthroat is one of three native trout indigenous to Colorado. The Colorado River cutthroat is found on Colorado’s Western Slope, and the Greenback cutthroat is found in drainages of the Front Range. CPW is also working on a variety of projects to restore those populations.

To learn more about Colorado’s native trout, go to: https://cpw.state.co.us/learn/Pages/Aquatic.aspx.