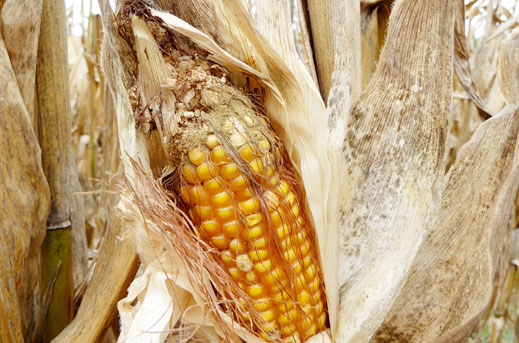 MADISON, Wisc. –It’s not fun when a fungus contaminates crops.  Safe native fungi, however, show promise in the fight against toxic fungal contamination.

The fungus Aspergillus flavus can infect several crops, including corn. Some varieties, or strains, of A. flavus produce aflatoxins. Aflatoxin contamination costs U.S. farmers billions of dollars every year. Worse, aflatoxins are harmful for humans and animals.

“Using native A. flavus strains could have many advantages,” says Ignazio Carbone, lead author of the new study. “Native strains may be better adapted to the soil type and weather conditions. Therefore, they may perform better in the field compared to non-native strains.” Carbone is a researcher at North Carolina State University.

Native strains, on the other hand, occur naturally in growing areas. They may be more persistent in the soil and not need to be reapplied every year.

Carbone and colleagues tested native strains of A. flavus that produce no or low levels of aflatoxin. They also tested commercial strains. Both reduced crop aflatoxin levels.

Unexpectedly, the study also showed that certain combinations of native strains are more effective than commercial strains in reducing aflatoxin levels. That’s because the combinations take advantage of fungal biology: their mating types are compatible, allowing them to reproduce and sustain their population.

When the researchers applied native strains of compatible mating types to the test plots, aflatoxin levels were reduced to less than 2 parts per billion in some cases. This was a better outcome than any commercial strain.

Although this study was conducted in North Carolina, Carbone anticipates the approach can work in other areas. A preliminary experiment in Texas also showed that paired native strains reduced aflatoxin levels more efficiently compared to a single commercial strain.

“We need to continue testing this approach in cornfields across different states,” says Carbone. “We also need to monitor aflatoxin levels over several growing seasons.”

Can this approach go beyond aflatoxin? Carbone is optimistic. “Fungal toxins pose a continual threat to food safety. Our approach can potentially be applied to other toxin-producing fungi as well.”

Read more about Carbone’s research in Agronomy Journal. This work was supported by the Agriculture and Food Research Initiative Competitive Grants Program grant no. 2013-68004-20359 from the USDA National Institute of Food and Agriculture (NIFA).

N.C. Plant Conservation Board to meet April 17 in Southport