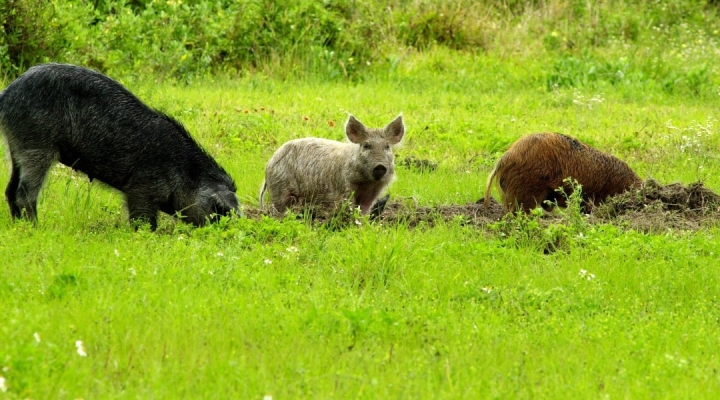 WASHINGTON — Wild boar, razorback, feral hog, wild pig—those are just a few of the names for one of the most destructive, formidable invasive species in the United States. Feral swine adapt to just about any habitat, have few natural enemies, and reproduce at high rates. Estimates vary, but their population likely exceeds 6 million nationwide. They cause tremendous damage—up to $2.5 billion annually—to crops, forestry, livestock, and pastures. Feral swine also present great risks to human health and safety. They can harbor and transmit dozens of parasites and diseases—such as pseudorabies, which is fatal to cats and dogs and a threat to domestic swine—as well as foodborne illnesses like E. coli, toxoplasmosis, and trichinosis.

Successes to Date
The National Feral Swine Damage Management Program has been instrumental in reducing the number of these animals and the damage they cause. The program has worked with 41 States and 3 Territories so far and has removed all feral swine from 11 States (CO, ID, IA, MD, MI, MN, NJ, NY, VT, WA, WI). In 6 of those States (CO, IA, MN, WA, WI, VT), Wildlife Services is monitoring conditions for 2 years to confirm eradication. Working with Wildlife Services researchers, program officials have also made great strides in developing and evaluating tools and techniques for preventing feral swine damage, including baits, traps, and aerial operations. In addition, they assess property damage, estimate feral swine populations, model disease spread, and educate the public about the impacts of these invasive animals.

Together, APHIS and its partners aim to limit the expansion of feral swine populations and the damage they cause and—where feasible–eradicate them.