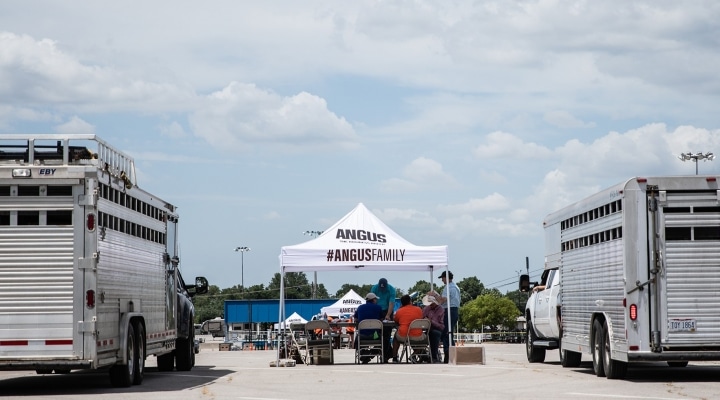 NJAS typically brings exhibitors from across United States for a weeklong event. This year, 37 states will be represented in the shortened and socially distant event. (Courtesy Photo)

The show was moved from Pennsylvania to Tulsa, Oklahoma when COVID-19 guidelines for Pennsylvania made it clear NJAS could not be held in that state.

“This year has been anything but normal, but we are doing our best to carry out the NJAS everyone knows and loves,” said Jaclyn Upperman, American Angus Association director of events and education.

NJAS typically brings exhibitors from across United States for a weeklong event. This year, 37 states will be represented in the shortened and socially distant event.

Throughout the planning stages, the Association prioritized the safety of exhibitors and their families with an extensive COVID-19 Response Plan. Exhibitors moved throughout a series of staging areas as they arrived on the Tulsa State Fairgrounds to ensure that they never had to leave their trucks to check in. Some contests were canceled, and others were modified. In addition, the arrival and departure schedule were made flexible to allow for fewer people in the barn throughout the week. It was decided opening and closing ceremonies would be held virtually to allow for people to watch from wherever they are – in the barn or in a different state.

The response from exhibitors has been positive, Upperman said. “While this year doesn’t look like the NJAS we’ve held before, we are happy that we’ve been able to get our Angus Family together.”

More than 1,400 head of cattle were entered this year, along with many entries in the virtual contests.

“We are looking forward to a great week with great young cattlemen and women,” said Mark McCully, American Angus Association CEO. “This week represents a year of hard work for these young people and we couldn’t be happier to be able to give them a stage to shine.”

Grill safely this spring and summer
May 9, 2021

Farmers ready for a sweet strawberry season
May 6, 2021

Cattle markets more stable a year into pandemic
May 9, 2021

North Dakota Beef Commission Celebrates “May is Beef Month” in N.D.
May 6, 2021