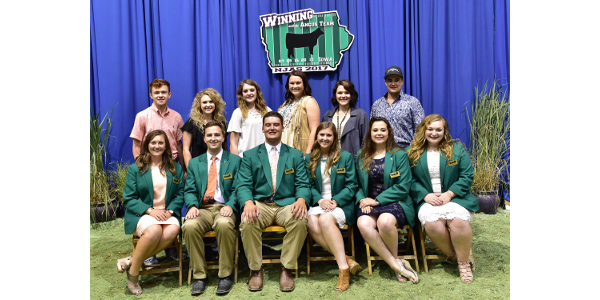 DES MOINES, Iowa — Throughout the barns, the prestige of the green jackets is widely recognized. National Junior Angus Board (NJAB) members serve as mentors, friends and the next generation of leaders for the Angus breed. During the 2017 National Junior Angus Show (NJAS), hosted July 9-15 in Des Moines, Iowa, six new junior leaders were elected by their peers to serve on the NJAB.

“Serving on the National Junior Angus Association Board of Directors is something I have dreamed about my whole life,” says Jera Pipkin, Republic, Mo., newly elected NJAB director.

Board members serve a two-year term and travel across the country to various events, promoting the Angus breed and helping young people succeed in the industry’s premier junior organization. Their first official activity is the Leaders Engaged in Angus Development (LEAD) conference in Raleigh, N.C., Aug. 3-6.

“This opportunity will allow me to show others how Angus can change your life, just like it did mine,” Pipkin says. “I wouldn’t be the person I am without the NJAA, and this is only a small step in what I owe to give back this association. I am extremely blessed, humbled and honored for this opportunity to serve.”

In addition to the new board members being elected, members serving for their second year on the NJAB were elected to officer positions.

Dal Porto says the NJAA sets itself apart because of the passion its members share for the Angus industry. Starting his sophomore year at Hutchinson Community College, where he is studying agricultural communications and is a member of the livestock judging team, Dal Porto plans to become an agricultural pharmaceuticals salesman in the future.

DeHaan purchased her first Angus female seven years ago. She hopes to live up to everything the green coat symbolizes by exemplifying dedication, passion and inspiration during her two years on the board. Entering her sophomore year at Purdue University, she is majoring in agricultural sales and marketing, and plans on adding agricultural communications as a dual degree.

Fitzgerald says the NJAA is unique because it offers so many events for its juniors. Currently, he is an Oklahoma State Cowboy studying agribusiness with a minor in marketing. He wants to pursue a career in foreign trade, particularly focusing on agricultural commodities.

Gerken believes what sets the NJAA apart is the family environment between its members. Currently, she is on the livestock judging team at Butler Community College and is pursuing a degree in animal science with hopes of being a feedlot nutritionist.

Pipkin is pursuing a degree in agricultural communications and animal science with a minor in agricultural business from Oklahoma State University. Since her family started in the Angus business in 1933, Pipkin has Angus cattle in her blood. She’s a fifth-generation Angus breeder and hopes to one day manage their family Angus operation, as well as have her own agricultural marketing firm.

Sundsbak says being elected to the NJAB is a dream come true. She is the current North Dakota Angus Queen and the North Dakota Junior Angus Association’s president. As a student at South Dakota State University, she is studying agricultural education with a minor in agriculture business and a certificate in agricultural and environmental law. She hopes to make a difference in student’s lives by pursuing a degree in teaching.

As the new six join the board, the old six also say goodbye to the NJAA and will retire in August at the LEAD conference. Those who ended their terms on the board are: Macy Perry, Prather, Calif.; Reese Tuckwiller, Lewisburg, W.Va.; Gabrielle Lemenager, Clifton, Ill.; Braden Henricks, Anadarko, Okla.; Tim Mardesen, Oxford, Iowa; and Katelyn Corsentino, Denham Springs, La.

The 2017 NJAS in Des Moines, Iowa, was a record breaker for the Angus breed. More than 1,260 head of Angus cattle were shown — the largest number since the last record was set 10 years ago.

Visit www.angus.org for complete show results and news from the event. Also, tune in to a special NJAS episode of The Angus Report at 7:30 a.m. (CDT) Monday, July 24, on RFD-TV.

Nominations for KCA Hall of Fame due Aug. 31