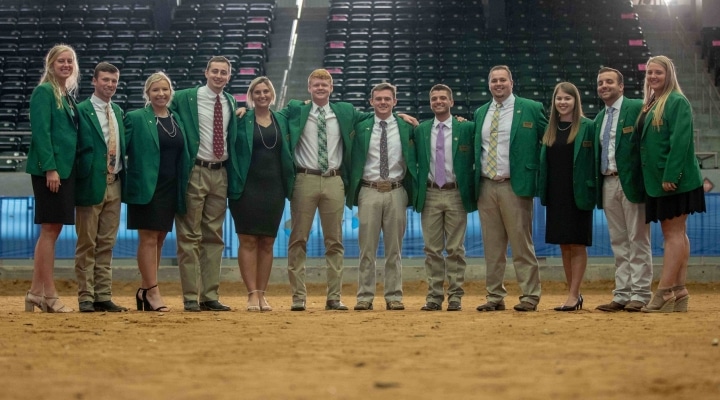 The new team members were announced during the virtual closing ceremonies on Sunday, July 26. (Courtesy Photo)

TULSA, Okla. — In a year of uncertainty, one thing remained consistent at the 2020 National Junior Angus Show – the election of high-quality individuals to lead the National Junior Angus Association (NJAA). Every summer, NJAA members elect six young adults to serve on the National Junior Angus Board (NJAB). The members selected are recognizable by their green coats at livestock shows and youth events throughout the country. The new team members were announced during the virtual closing ceremonies on Sunday, July 26.

The National Junior Angus Board members serve two-year terms; the first year on the board of directors and the second as officers in the Association. During their tenure, they travel to shows and conferences, plan and execute educational events for fellow young cattlemen and women, promote the Angus breed and help juniors succeed in the classroom, show ring and various educational contests held by the Association.

“Watching the next generation of cattlemen and women succeed is why we do what we do,” said Jaclyn Upperman, American Angus Association director of events and education. “Our team helps guide them in their endeavors, but we learn from them just as much. I’m excited to watch these young leaders become even stronger advocates for our breed and the cattle industry as a whole.”

Get to Know the NEW NJAB

Alex Cozzitorto is no stranger to the Angus breed. As an involved member of the Kansas Junior Angus Association and a third-generation Angus breeder, Cozzitorto has held multiple leadership positions and has served as the Kansas Angus Princess. As an incoming sophomore at Texas A&M University, Cozzitorto is studying animal science with plans to pursue a law degree, specializing in agriculture law and policy. Her mission is to represent and protect the agricultural industry in her future career.

“It’s an absolute honor and privilege to have the opportunity to give back to the juniors in the same way that I was given my entire junior career,” Cozzitorto said. “This is a dream come true for me and my family.”

Josh Jasper is a third-generation Angus breeder from the Bluegrass State of Kentucky. Jasper is currently pursuing a career as an auctioneer and licensed real estate agent with a focus on buying and selling farmland. He credits the friendships and networking opportunities obtained through the NJAA as preparation for an auctioneering career.

“This experience means so much to me because my family has been involved in this industry for a long time,” Jasper said. “It’s an honor to serve as a role model for the junior members.”

Walker McDermott hails from the state of Iowa where he attends Iowa State University, double majoring in animal science and agricultural communications. He plans to advocate for the beef industry in his future career, and this first-generation Angus breeder thanks the NJAA for fueling his passion for the beef business. As an active member of the Iowa Junior Angus Association and Iowa FFA Association, he is excited about the opportunity to serve the Angus membership.

“I am blessed and excited to have the opportunity to impact juniors just as much as past junior board members have impacted me,” McDermott said. “I hope to make positive changes while keeping the tradition of the Association alive.”

Cutter Pohlman is an incoming freshman at Texas Tech University, majoring in animal science and agribusiness. As a West Texas native, Pohlman was raised in the Angus business and plans to continue his involvement after graduation. Pohlman has attended multiple Leaders Engaged in Angus Development (LEAD) conferences, as well as Raising the Bar and other Texas Junior Angus Association events. His family has been involved in the NJAA for generations, and he is excited to give back to the Association as a green coat.

“This breed raised me and has given me everything I know and have,” Pohlman said. “I am blessed to have the opportunity to serve this great association and its juniors.”

Eric Schafer was raised on his family’s diversified crop and livestock operation in Illinois. He will attend Butler Community College in El Dorado, Kansas, this fall as an incoming freshman. He plans to pursue a law degree and credits the communication and leadership skills obtained in the NJAA for guiding him on that path. A decorated NJAA member, he has earned the Bronze and Silver awards, scholarships, the Stockman award and more during his tenure as a junior member.

“This organization has made me who I am today, and I want to give as much of that back to that organization as its given to me,” Schafer said.

Garret Schuering is the representative from the Show-Me State of Missouri. As an incoming freshman at Moberly Area Community College, he plans to continue his education at Oklahoma State University to major in agribusiness and agriscience. Schuering plans to pursue a career in farm management or in the feed yard sector. He looks forward to growing as a leader and challenging himself to be the best he can be while serving on the NJAB.

“I’ve always enjoyed working with younger members and showing them the ropes of the Association,” he said. “This role will allow me to strengthen my leadership skills and in turn, strengthen the Association as a whole.”

While the new six officers join the ranks, the previous six officers will step down and pass their green coats to the new team. Their final activity as members of the NJAB is typically hosting the LEAD conference which is held each August. New this year, the NJAB will host Camp Angus, August 4-6, in Nebraska City, Nebraska.

Visit njas.info for complete show results from the National Junior Angus Show and news from the event.

Garrison man out on bond after arrest in Van Zandt Co.