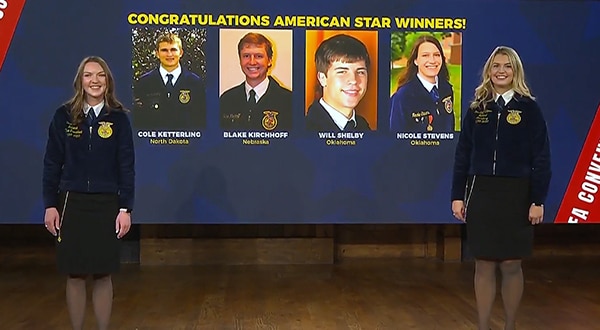 Each year at the National FFA Convention & Expo, four FFA members are honored with American Star Awards for outstanding accomplishments in FFA and agricultural education. This year, two of those four were from Oklahoma: Will Shelby, Madill FFA, Star in Agricultural Placement; and Nicole Stevens, Yukon FFA, Star in Agriscience.

INDIANAPOLIS — Each year at the National FFA Convention & Expo, four FFA members are honored with American Star Awards for outstanding accomplishments in FFA and agricultural education. This year, two of those four were from Oklahoma: Will Shelby, Madill FFA, Star in Agricultural Placement; and Nicole Stevens, Yukon FFA, Star in Agriscience.

Working with animals is second nature for Will Shelby of Madill FFA in Oklahoma. Raised by a veterinarian, Shelby experienced his future career early on, starting his placement supervised agricultural experience (SAE) as a veterinary assistant in his father’s large-animal practice.

“Growing up around it, I kind of had an idea as to what I wanted to do,” Shelby said. “The older I got, the more I realized that maybe there’s a lot of different routes you could go in veterinary medicine that I wasn’t even aware of when I was younger. … I really began an interest in the reproductive side of things, especially in the bovine animal.”

Then, Shelby went on to work as a veterinary assistant at a practice in Cushing, Okla., last year.

“Vaccinations for dogs and cats, general exams and then even surgeries and things like that, I would assist on,” he said. “The veterinarian there also did some reproductive work for cattle, such as embryo transfer and AI [artificial insemination], so I got to be a part of that as well.”

While his father’s career helped Shelby figure out his future, he said FFA helped him develop character, leadership skills and a strong work ethic.

“That’s something that I’m really thankful FFA taught me — I’m not sure I would be a strong-willed guy if I wasn’t at FFA,” Shelby said.

“There’s such a large demand for large animal veterinarians, especially in rural areas,” Shelby said.  “Cattle, especially in Oklahoma, are such a big commodity to our agriculture industry.”

“Once you do that, buy into it and give it everything you have, because if you’re willing to do that, I can truthfully tell you this program, your SAE, you will get more from it than you ever could have imagined,” he said.

Agriscience is a family affair for Nicole Stevens — Scott Stevens, her father and FFA advisor at Yukon FFA in Oklahoma, encouraged his children to participate in the National FFA Agriscience Fair. Through her years in FFA, scientific research became a bonding point for the father-daughter pair.

“We competed every year, many projects a year sometimes,” Stevens said. “My sophomore year, I had six. We really liked science. It was super fun for us.”

Starting in eighth grade and going into college, Stevens has been involved in various types of agriscience research, from plant science to animal science.

“For me, the main goal for my research was to make myself a better ag teacher, because I love agriscience so much,” said Stevens, who is now working toward a master’s degree in agricultural education at Oklahoma State University. “I wanted to spread myself through each different type of research.”

In her most recent research experience, Stevens studied ruminant digestion. Using cannulas to insert and remove feed samples in cattle stomachs, the project measured digestion processes to formulate more cost-effective feeding practices. This is particularly important, Stevens said, because of the COVID-19 pandemic’s impact on the cattle industry.

“Beef prices are so expensive because it’s so hard to produce enough beef for the consumers, with all the processing plants being shut down and stuff like that,” Stevens said. “So trying to find out more cost-efficient ways for those farmers to produce enough animals in that time frame with that situation right now, that’s why that research is super important.”

Stevens hopes to take her research experience to the classroom. After earning her master’s degree, Stevens will teach agricultural education for a few years and then return to school for her doctorate. Her advice for FFA members interested in agriscience: Go for it.

“Agriscience is super adaptable,” Stevens said. “[There] is such a broad range that there’s something that every student can be passionate about.”

Sixteen American Star Award finalists from throughout the U.S. were nominated by a panel of judges who then interviewed the finalists this fall. Four were named winners during the 93rd National FFA Convention & Expo this year, which was held virtually. Winners received cash awards. Case IH, Elanco Animal Health and Syngenta sponsor the awards.

The National FFA Organization is a school-based national youth leadership development organization of more than 760,000 student members as part of 8,700 local FFA chapters in all 50 states, Puerto Rico and the U.S. Virgin Islands.

What to expect when applying for an ag sales tax exemption permit
June 16, 2021