Home / Minnesota / National Farmers Union President brings Fairness for Farmers update to Minnesota Farmers Union State Convention
A new user experience is coming! We'll be asking you to login to your Morning Ag Clips account March 1st to access these new features.
We can't wait to share them with you! Read more here. 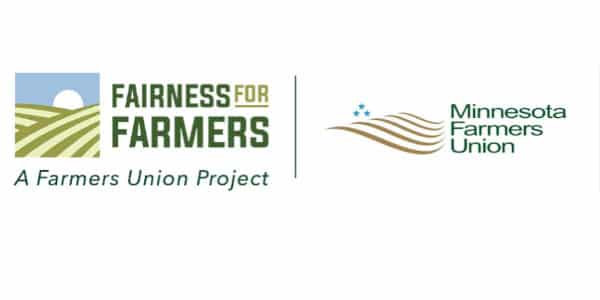 Fairness for Farmers is a campaign to fight for a fair market and against corporate monopolies.

ST. PAUL — Did you know that the farmer’s share of every dollar that consumers spend on food has fallen from 50 percent in 1952 to less than 16 percent today?

Did you know that in the past five decades, 40 percent of flour mills and 88 percent of meat processing facilities have gone out of business?

That’s why National Farmers Union launched Fairness for Farmers, a campaign to fight for a fair market and against corporate monopolies. This includes advocacy for four solutions:

“Mergers and acquisitions over several decades have resulted in agriculture and food supply chains that are uncompetitive, fragile and underpay farmers while overcharging consumers,” Larew said. “The giants who dominate our food and agriculture industry are not going to be toppled without a struggle. We are ready to stand up for fairness for family farmers.”

“Farmers Union was formed by farmers who weren’t getting a fair price for their products,” Wertish said. “Today, Farmers Union is leading the way not only in fighting for fair prices for family farmers, but also in establishing relationships to create new markets through Minnesota Foodshed, biofuels advocacy and rebuilding small and mid-sized meat processors.”

There is no charge to attend the convention, but meals are ticketed events. A tentative convention agenda can be found on the Minnesota Farmers Union website.