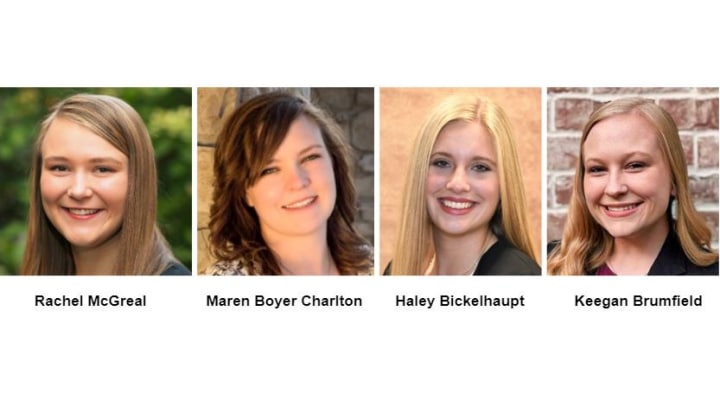 Rachel McGreal is a junior at the University of Illinois where she’s studying agricultural communications with a concentration in journalism and a minor in food and environmental sciences. Rachel grew up on her family’s grain farm in Chatsworth, Illinois.

While in college, Rachel has become involved in Illini Agricultural Communicators of Tomorrow and Illini Equine Rescue Society. Last school year, she served as the National ACT vice president as well as the Illini ACT secretary. She is now serving as the Illini ACT vice president. Rachel interned with the Marketplace Engagement Department at Farm Credit Illinois last summer and will continue her work there through next summer.

In her free time, Rachel enjoys photography and videography. She hopes to pursue a future career using these skills to tell stories about agriculture. Rachel would also eventually like to return to her family farm in pursuit of becoming a fifth-generation farmer.

Maren Boyer Charlton is a senior at Utah State University where she is studying agricultural communications and journalism with an emphasis in social media and a minor in consulting. Maren was born and raised on a sheep and goat ranch in Coalville, Utah and has had a goat or sheep in her hands since she was three years old. She has shown market goats and sheep, along with registered Rambouillets, which propelled Maren to start her own company, Tiger M Livestock. You can still find Tiger M genetics in top producer’s flocks across the country.

Since returning home from her 18-month missionary service in 2019, Maren has been heavily involved in the sheep industry. She is a communications director for Sheep Genetics USA, National Ram Sale, Chalk Creek Boer Goats and Utah State Extension Farm Safety. Maren has been a member of the ACT since she was a freshman in college and has served as the Social Media Chair for her chapter.

When not in class or work, you can find Maren at home with her husband, two dogs, two hedgehogs and her 50-gallon fish tank. As soon as her husband finishes vet school, the two plan to reenter the sheep and goat industry to become a fourth-generation sheep rancher and first-generation hedgehog producer.

Haley Bickelhaupt is a junior at the University of Illinois where she is studying Agricultural Communications with an emphasis in Journalism and a minor in Food and Environmental Sciences. Haley is from Mount Carroll, Illinois where she grew up on her family’s purebred Hereford cattle farm and grain operation.

Haley became involved with Illini and National ACT as a freshman at the University of Illinois. In Illini ACT she has served in numerous roles including her current position as Chair of External Relations.

After a great experience as Trans Ova Genetics Marketing intern last summer, Haley would like to continue working in the communications field within the agriculture industry and is excited for the opportunity to work with communicators across the country.

In addition to her love for agriculture, Haley is passionate about sharing the love of Christ and spending time with her friends and family.

Keegan Brumfield is a junior at Texas A&M University double majoring in Agricultural Communications & Journalism and Agricultural Leadership, Education, & Development. Keegan is from South Texas and was active in both 4-H and FFA, where she attended state competitions and explored various leadership opportunities. Having grown up on a farm, Keegan’s passion for agriculture began at a young age and hasn’t slowed down since.

Through her university, Keegan is an active member and treasurer of the Texas A&M Agricultural Communicators of Tomorrow chapter and enjoys working with like-minded individuals within the agricultural field. In the future, Keegan would love to work for a stock show and give back to the industry that inspired her to pursue a degree in Agricultural Communications.

About the National Agricultural Communicators of Tomorrow (National ACT):

National ACT offers many opportunities including membership to several agricultural organizations. It also hosts contests and gives out awards to distinguished members of the agricultural industry. They have strong support from industry professionals and organizations that encourage success of students with an interest in agricultural communications. Those interested in becoming a supporter of the National ACT are encouraged to visit https://nactnow.org/sponsors/.