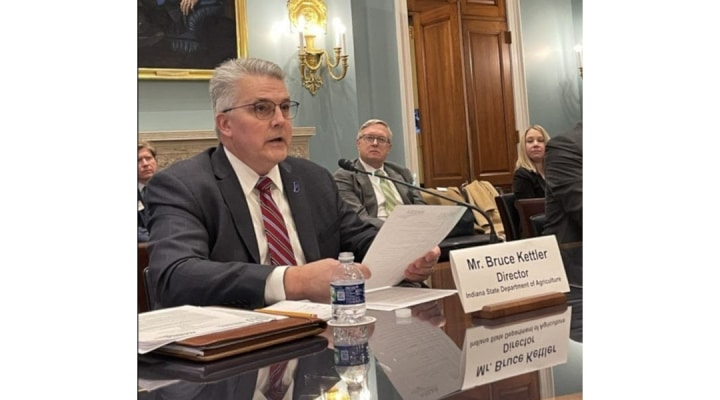 “It is vital Congress provides certainty by delivering a forward-looking, fully funded farm bill, on time,” said Bruce Kettler, Director of the Indiana State Department of Agriculture and Second NASDA Vice President. “If the pandemic and the recent events unfolding in Ukraine have taught us anything, it is that this farm bill, and all future farm bills are an issue of national security.” (Courtesy Photo)

WASHINGTON — Bruce Kettler, Director of the Indiana State Department of Agriculture and Second Vice President of the National Association of State Departments of Agriculture testified before the U.S. House Committee on Agriculture Subcommittee on Biotechnology, Horticulture, and Research today. Kettler’s remarks addressed the importance of completing the farm bill, states’ co-regulatory role with the federal government and farmers’ challenges in accessing specialty crop block grants.

Kettler emphasized the necessity of a bipartisan, fully funded 2023 Farm Bill and how certainty for farmers in policy and regulation is key to effective implementation of the bill further down the line.

“It is vital Congress provides certainty by delivering a forward-looking, fully funded farm bill, on time,” Kettler said. “If the pandemic and the recent events unfolding in Ukraine have taught us anything, it is that this farm bill, and all future farm bills are an issue of national security.”

Sharing from NASDA’s unique perspective as the nexus between states and the federal government on agriculture and food policy, Kettler stated that state and federal agencies’ work to “promote economic stability while guaranteeing a safe and accessible food supply” must be a “joint venture.”

He encouraged further cooperation between states and federal agencies and proposed five principles for “cooperative federalism.”

Regarding Specialty Crop Block Grants, Kettler touched on the need for a stronger definition of “specialty crops,” and the challenge smaller farms face in accessing grant money when competing against larger institutes for the same pool of funding.

“One difficulty our team faces every year is answering the question, ‘What is a specialty crop?’” Kettler said.  The current definition is broad and creates confusion on which crops make the cut. Sunflowers are one example.”

He also shared those smaller groups and businesses have the knowledge and ideas that would benefit their local specialty crop industry, but they don’t have the same access to the program.

“We ask that the Committee consider allowing USDA to direct funds to be used for technical assistance for the grant application process, and that the grant parameters be expanded to address the current and future needs of the industry,” Kettler said.

As Director of the Indiana State Department of Agriculture, Kettler directs Indiana’s work to ensure the safety of our food, the abundance of our food supply, protect animal and plant health, implement conservation programs, promote the vitality of rural communities, and more.

Kettler thanked the subcommittee for the opportunity to speak during the hearing “A 2022 Review of the Farm Bill: Horticulture and Urban Agriculture,” and share his and NASDA’s perspective on these timely issues.

NASDA is a nonpartisan, nonprofit association which represents the elected and appointed commissioners, secretaries and directors of the departments of agriculture in all 50 states and four U.S. territories. NASDA grows and enhances American agriculture through policy, partnerships and public engagement. To learn more about NASDA, visit nasda.org.