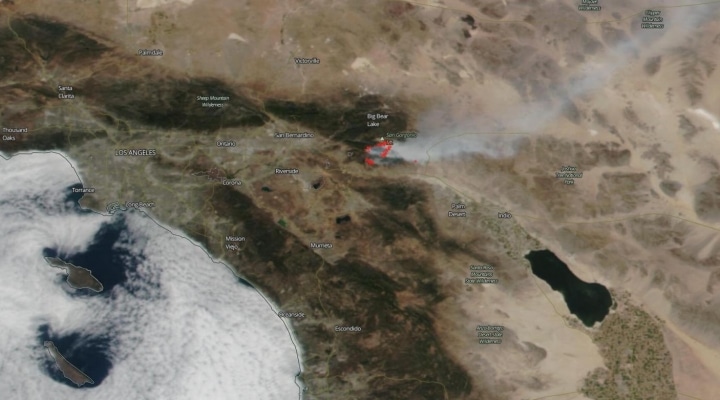 NASA's Suomi NPP satellite was working overtime as it snapped pictures of the large Apple Fire in Banning Canyon near San Bernardino, California on Aug. 02, 2020. (NASA/NOAA)

SAN BERNADINO, Calif. — NASA’s satellites were working overtime as they snapped pictures of the large Apple Fire in Banning Canyon near San Bernardino, California on Aug. 02, 2020. This fire began on July 31, 2020 and the cause of the fire is still under investigation. To date the fire has consumed 20,516 acres and is 5% contained. Much of the northern and eastern edge of the fire is located in very steep, rugged hillsides not easily accessible to firefighting vehicles. Low humidity, high temperatures, low moisture content in the surrounding vegetation and winds all contribute to the spread of fire once it breaks out. This fire is burning in an area that haso not had fire activity in recent years leaving it with plenty of fuel for growth. Hot, dry conditions are expected to continue in the area.

NASA’s satellite instruments are often the first to detect wildfires burning in remote regions, and the locations of new fires are sent directly to land managers worldwide within hours of the satellite overpass. Together, NASA instruments detect actively burning fires, track the transport of smoke from fires, provide information for fire management, and map the extent of changes to ecosystems, based on the extent and severity of burn scars. NASA has a fleet of Earth-observing instruments, many of which contribute to our understanding of fire in the Earth system. Satellites in orbit around the poles provide observations of the entire planet several times per day, whereas satellites in a geostationary orbit provide coarse-resolution imagery of fires, smoke and clouds every five to 15 minutes. For more information visit: https://www.nasa.gov/mission_pages/fires/main/missions/index.html