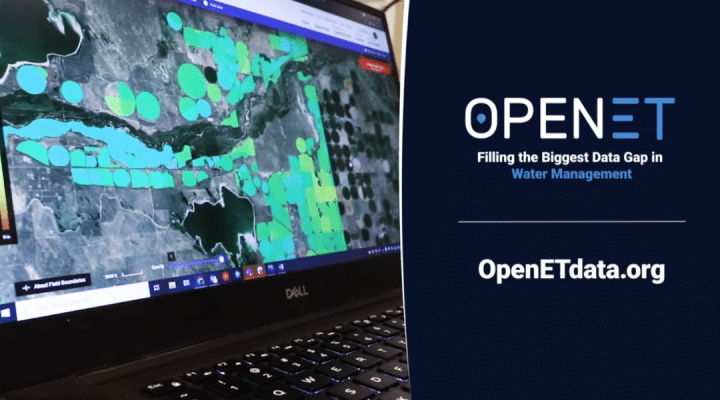 The platform, OpenET, uses satellite imagery from the Landsat program, a decades-long project of NASA and the U.S. Geological Survey that records human and natural impacts on Earth's surface. (NASA Applied Sciences/Mike Brophy)

DENVER (AP) — NASA on Thursday launched an online platform with information on how much water evaporates into the atmosphere from plants, soils and other surfaces in the U.S. West, data it says could help water managers, farmers and state officials better manage resources in the parched region.

The platform, OpenET, uses satellite imagery from the Landsat program, a decades-long project of NASA and the U.S. Geological Survey that records human and natural impacts on Earth’s surface.

Specifically, it provides data for 17 Western states — down to the quarter-acre — on how much evapotranspiration has taken place. That’s the process by which moisture in leaves, soil and other surfaces evaporates into the air.

The West has been mired in drought for more than two decades. Scientists say human-caused climate change has intensified conditions. Water levels at key reservoirs on the Colorado River have fallen to historic lows alongside growing demand, prompting the federal government to declare water cuts for some states next year. A blazing summer and years of record-breaking wildfires have also zapped moisture from the ground.

Detailed information on soil moisture could help farmers and water managers better plan during dry conditions and reduce how much water is used for irrigation, NASA scientists said on a Thursday call with reporters.

“Farmers and water managers have not had consistent, timely data on one of the most important pieces of information for managing water, which is the amount of water that’s consumed by crops and other plants as they grow,” said Robyn Grimm, a water specialist with the Environmental Defense Fund, which helped NASA develop the tool alongside other environmental groups and Google.

“To date, that data has been expensive and fragmented,” she said.

Many large farms in dry areas, such as California’s Central Valley, already have years of experience using advanced data systems to measure evapotranspiration and other water metrics that influence their growing and harvesting seasons and watering schedules.

Cannon Michael runs an 11,000-acre (4,452 hectare) farm in Merced County, California, that produces tomatoes, melons, cotton and alfalfa. Michael said he looked at NASA’s new platform, but didn’t think it would provide any additional benefit for his farm.

“We closely monitor and understand our water use,” he said. “Our farm is 75% drip irrigation, and we have a very detailed scheduling and forecasting process already in place.”

Meanwhile, Colorado rancher Joe Stanko in Steamboat Springs had read about the new tool in a magazine. Her family grows hay for their cattle, and she said the platform could help them determine which fields need more water to replenish soil. It could also help them decide when to harvest hay.

NASA said the platform includes historical data dating back to 1984. In coming months, it will be updated to include information about precipitation rates with the same level of detail. Eventually, the tool will extend to other parts of the U.S., including areas around the Mississippi River and Appalachian region, scientists said.

The Associated Press receives support from the Walton Family Foundation for coverage of water and environmental policy. The AP is solely responsible for all content. For all of AP’s environmental coverage, visit https://apnews.com/hub/environment

Oklahoma Ag in the Classroom is hosting Ag Career CAMPs

Understanding consumer perceptions of sustainability in the dairy industry