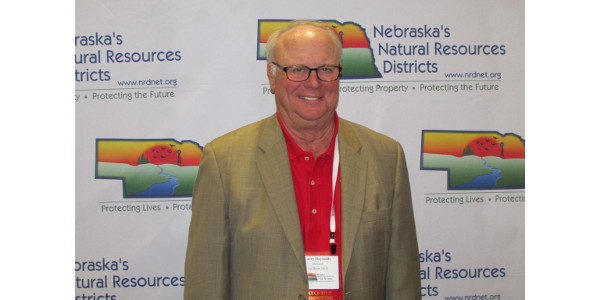 LINCOLN — New officers for the Nebraska Association of Resources Districts (NARD) were elected during the NARD Board meeting on March 12, 2018.

Larry Reynolds from the Tri-Basin Natural Resources District (TBNRD) was elected President of the NARD Board of Directors. Reynolds has been a member of the TBNRD board for 33 years and served in the United States Air Force for eight years and in the Nebraska Air National Guard for 18 years. Reynolds currently farms and helps manage the family cow/calf operation near Lexington. Reynolds served as the NARD secretary-treasurer from 2014-16 and the vice-president from 2016-18.

“It is an honor to serve with elected citizens who are concerned about the wise and sustainable use of our natural resources, not the least of which is water,” Larry Reynolds said. “Their expertise and willingness to participate in a natural resources district system, which is the envy of the nation, is truly inspirational.”

The NARD Board elected Jim Eschliman from Lower Loup Natural Resources District (LLNRD) as vice-president. Eschliman is also the vice-chair of the Lower Loup NRD Board and has served on the NARD Board since 2016. He has served on the LLNRD Board for 13 years. He has also served as program and projects committee chairman. Jim operates Eschliman Family Dairy along with his wife, Deb, in Wheeler County by Ericson. In addition, Eschliman is on the local Coop Board and the Cattleman’s Beef Board.

“I am very humbled and honored to be elected to the position of vice-president of the NARD board,” Jim Eschliman said. “I’m excited to work with Chairman Larry Reynolds and Secretary-Treasurer Milt Schmidt to further the NRDs’ mission.”

The NARD Board elected Milt Schmidt from the Lower Platte South NRD (LPSNRD) as secretary-treasurer. Schmidt has served as the Lower Platte South NRD representative to the NARD Board since 2016. He also served as the alternate NARD Board member from 2014-16. Schmidt was elected to LPSNRD in 2012 and has served in several leadership roles for the district. He served two years as chairman of the Recreation, Forestry & Wildlife Sub-committee and two years as chairman of the Platte River Sub-committee. He has also served two years as Secretary for the LPSNRD. Schmidt retired from Goodyear after 35 years. After that, he worked for the United Way in Lincoln for five years. He continues to volunteer his time for many charities in the Lincoln community.

“The NRDs work hard to protect the future of Nebraska as we conserve our natural resources,” Milt Schmidt said. “I’m excited to work with this team to continue making a positive difference in people’s lives now and for generations to come.”

The officers serve on the NARD Executive Committee along with chairs from the Information and Education Committee, Legislative Committee and the past NARD Board President. Larry Reynolds re-appointed Jim Johnson from South Platte Natural Resources District (SPNRD) as chair of the Information and Education committee and Jim Meismer from Twin Platte Natural Resources District (TPNRD), as chair of the Legislative and Government Affairs Committee.

Jim Bendfeldt from the Central Platte Natural Resources District (CPNRD), will serve on the NARD Executive Committee as the past NARD Board President. Bendfeldt is currently board chairman of the CPNRD. Bendfeldt previously held the president, vice president and secretary-treasurer positions. In 2011, Bendfeldt was awarded the NARD Director of the Year award. Bendfeldt also serves on the Platte River Recovery Implementation Program Board as a land acquisition member.

The NARD Board consists of representation from each of the 23 local NRDs. The board members meet five times throughout the year and help guide the association and the NRDs in decision-making that protects lives, protects property and protects the future of Nebraska’s natural resources.