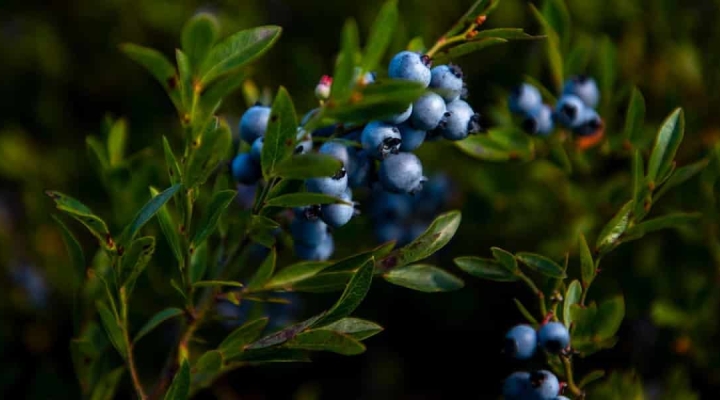 To understand how nanocellulose, particularly in the form of cellulose nanofibrils, could benefit wild blueberries, a UMaine research team led by Rafa Tasnim, a Ph.D. candidate in ecology and environmental sciences, investigated how a mixture of it and foliar fertilizer interacted with plant leaves and through that interaction, affected crop yield, water use and storage.  (Photo: UMaine)

ORONO, Maine — Nanocellulose may help increase the yield from wild blueberry plants when used with liquid fertilizer applied to leaves, according to a new University of Maine study.

Nanocellulose, a natural polymer derived from trees and plants that has many desirable properties, is used in research and development for a myriad of applications, such as packaging materials, building products, medical supplies, paint, cement, food containers and much more. Previous studies have also found that nanocellulose can improve the adherence of foliar-applied fertilizers and pesticides, which are used directly on leaves; and nanocellulose could make it easier for plant leaves to retain and absorb nutrients.

To understand how nanocellulose, particularly in the form of cellulose nanofibrils, could benefit wild blueberries, a UMaine research team led by Rafa Tasnim, a Ph.D. candidate in ecology and environmental sciences, investigated how a mixture of it and foliar fertilizer interacted with plant leaves and through that interaction, affected crop yield, water use and storage.

The nanocellulose used for the project came from UMaine’s Process Development Center, an on-campus facility that can generate one ton of it per day. They tested it and the fertilizer on leaves from both common lowbush wild blueberries, which researchers say typically makes up 90% of blueberries in a given field, and velvet-leaved lowbush ones growing at UMaine’s Blueberry Hill Farm in Jonesboro.

The team found an increase in yield among common lowbush blueberries that received the nanocellulose-infused fertilizer, albeit not significantly. Researchers believe the increased production resulted from the nanocellulose reducing the particle size of nutrients from the fertilizer, making it easier for the blueberry leaves to absorb them and facilitating an uptick in consumption.

Further investigations need to be conducted to determine whether increasing the amount of nanocellulose in the fertilizer will result in an even greater yield from common lowbush blueberries, according to researchers. The effects it could have on yield for velvet-leaved lowbush blueberries also should be examined, they say.

Other researchers involved in the study included YongJiang Zhang, an assistant professor of applied plant physiology; Lu Wang, an assistant research professor with the Advanced Structures and Composites Center, and Mahesh Parit, a former postdoctoral research associate with the Composites Center who is now a senior research scientist with RiKarbon. They published a paper describing their research and its results in the journal Agricultural Science & Technology.

This research builds on a previous study led by Tasnim that identified nanocellulose as a “potentially promising adjuvant for foliar fertilizers for wild blueberries.”

The latest study, however, revealed a possible trade off between yield and water conservation in wild blueberry plants when using nanocellulose-infused foliar fertilizers on the leaves. Velvet-leaved lowbush blueberry plants with nanocellulose-infused foliar fertilizer took in more water and dehydrated faster, although the same did not occur in common lowbush blueberries, according to researchers.

The trichomes, or hair-like appendages, in the leaves of velvet-leaved lowbush blueberry plants are denser than those in common lowbush blueberry plants, which researchers say they believe allowed the former to interact with nanocellulose more, and thus absorb and use more water at a more rapid rate. Faster water absorption could allow for a more rapid intake of nutrients from nanocellulose-infused fertilizers, according to researchers.

“Nanocellulose provides an environmentally friendly approach for growers to enhance fertilizer use efficiency, and to increase yield,” Zhang says. “Also, we will test using nanocellulose to prevent frost damage in late spring, which has become more frequent in recent years.”

The study was published days before UMaine announced its new Wyman’s Wild Blueberry Research and Innovation Center, which is being built in Old Town. The facility is made possible by a gift from Wyman’s, a 148-year-old family-owned business based in Milbridge, to the University of Maine Foundation.

When the center opens in 2024, Zhang will use it for his investigations into how different wild blueberry genotypes will respond to climate warming to build resilience in the crop. The facility also will help Zhang assess the use of biochar, a processed form of timber harvest byproducts, to improve water-holding capacity in the soil, which may ultimately help Maine’s growers hedge against drought.