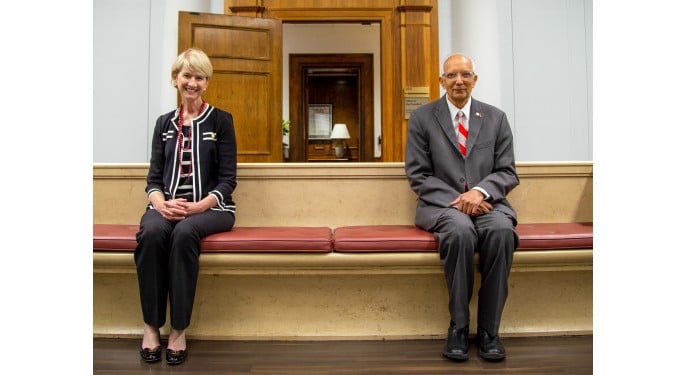 COLUMBUS, Ohio — The legacy of Rattan Lal, one of the world’s top scientists, has been bolstered with the addition of his name to a center at The Ohio State University. The honor was bestowed on Oct. 15, in a virtual ceremony hosted by Ohio State, Nationwide Insurance, and Ohio Farm Bureau.

Earlier in the day, Lal received the 50th annual World Food Prize, often referred to as the “Nobel Prize in Food and Agriculture.”

Lal serves as Distinguished University Professor at Ohio State’s College of Food, Agricultural, and Environmental Sciences (CFAES) and is the founding director of what will now be known as the CFAES Rattan Lal Carbon Management and Sequestration Center (C-MASC).

“Although it would be an exception for a current faculty member to be acknowledged with an honorific naming, Dr. Lal’s accomplishments and the notoriety he has brought to our university warrants this exception,” said Cathann A. Kress, Ohio State vice president for agricultural administration and dean of CFAES.

Much of Lal’s work has looked at carbon sequestration in agriculture and removing atmospheric carbon for the long-term, mitigating global warming and pollution effects. In 2000, he established the Ohio State center, the longest running U.S. institution with a focus on carbon sequestration in both natural and managed terrestrial ecosystems, and in particular soils.

“I strongly believe that the health of soil, plants, animals, and people are equal systems—one and indivisible,” Lal said. “Soil is like a bank account. You cannot withdraw more than you put in. It must be managed carefully and input must exceed output.”

From his humble beginnings as a refugee growing up on a small subsistence farm in India, Lal’s determination to learn and succeed in school propelled him to become one of the world’s foremost soil scientists. Watching his family use oxen to plow hard soils in an environment that often reached 115 degrees Fahrenheit launched his interest in soil, its degradation, and how to better protect it.

His pioneering research on the restoration of soil health in Africa, Asia, and Latin America led to revelations that impacted agricultural yields, natural resource conservation, and climate change mitigation. The agricultural practices Lal has advocated, such as no-tillage, cover crops, and agroforestry, are now at the heart of efforts to improve agricultural systems in the tropics and globally.

“Naming the C-MASC after Dr. Lal will elevate the center and engage stakeholders that otherwise might not have interest, as well as pay tribute to his remarkable accomplishments and impact,” Kress said.

Lal has received multiple international awards for his work over the years. In 2020, he won not only the World Food Prize, but also the Canadian-based Arrell Global Food Innovation Award. In 2019, he became the first Ohio State scientist and the first soil scientist ever to receive the Japan Prize. Prior recognitions include the Glinka World Soil Prize (2018), the World Agriculture Prize from the Global Confederation of Higher Education Associations for the Agricultural and Life Sciences (2018), the Liebig Award (2006), the Swaminathan Award for Environment Protection (2009), and the Norman Borlaug Award (2005).

Input and collaborations from many scientific disciplines are needed to increase knowledge and guide climate change adaptation and mitigation. This knowledge is also “crucial to informing policy makers and other stakeholders on climate-smart and climate-resilient soil and land-use management practices,” said Kress.

Morley O. Stone, Ohio State’s senior vice president for research, noted that over the course of his career, Lal has supported and mentored thousands of undergraduate and graduate students, and postdoctoral and visiting scholars. Stone further noted that Lal’s research has led to more sustainable farming and greater access to nutritious food for 2 billion people across five continents.

“Naming the lab after Dr. Lal will allow us to showcase and share his work with others,” Stone said. “It will provide opportunities to garner support from those who share our enthusiasm and sincere appreciation for his pioneering research and the legacy he will leave.”

A resolution to name the center the CFAES Rattan Lal Center for Carbon Management and Sequestration will be presented to Ohio State’s Board of Trustees at its Nov. 18 meeting.