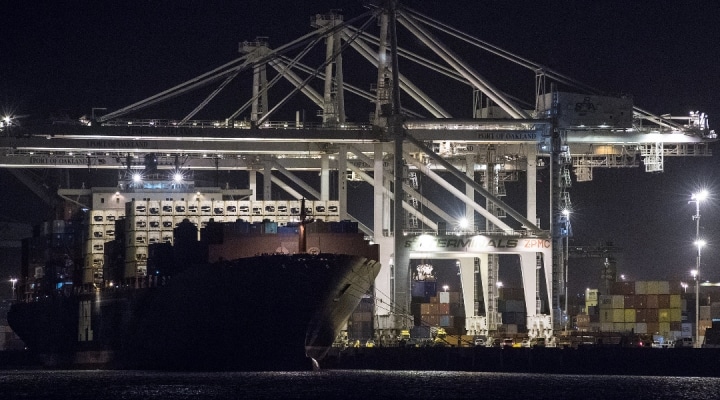 At issue is the continued behavior of ocean carriers to decline to carry U.S. agriculture commodity exports and instead return empty containers to Asian markets to fill them with more lucrative consumer goods to export back to the U.S. (U.S. Department of Agriculture, Public Domain)

WASHINGTON — With delays and congestion at U.S. ports hurting U.S. agriculture exports, including meat and poultry products, the North American Meat Institute (Meat Institute) today urged U.S. Secretary of Agriculture Tom Vilsack and the Congress to confront the crisis as part of efforts to improve and strengthen the food supply chain.

“As part of USDA’s focus on ensuring America’s food supply chain is resilient, diverse and secure, we urge Secretary Vilsack to help resolve persistent challenges at our ports,” said Julie Anna Potts, President and CEO of the Meat Institute.

At issue is the continued behavior of ocean carriers to decline to carry U.S. agriculture commodity exports and instead return empty containers to Asian markets to fill them with more lucrative consumer goods to export back to the U.S. Further, ocean carriers and marine terminal operators are charging excessive and unreasonable detention and demurrage fees assessed on U.S. importers and exporters for the failure of these importers and exporters to either retrieve a container from a marine terminal or return one within a specified amount of time, even if delays in retrieving or returning containers are beyond the control of the importer or exporter.

“Failure to hold these carriers accountable could have long-lasting, detrimental effects for the trade-dependent U.S. meat and poultry industry and agriculture sector which has caused $1.5 billion in lost revenue,” said Potts. “If current ocean carrier practices persist, and are not subject to oversight, then the U.S. meat and poultry industry, its workers and the communities it supports will struggle to access these vital markets that have been cultivated over decades.”

The Meat Institute underscored these concerns in testimony provided today to the House Committee on Transportation and Infrastructure Subcommittee On Coast Guard and Maritime Transportation for its hearing entitled: “Impacts of Shipping Container Shortages, Delays, and Increased Demand on the North American Supply Chain.”

The following are key excerpts from the testimony:

“Asia accounts for a significant portion of U.S. meat and poultry trade, with China, Japan, and Korea among the top markets for both beef and pork annually. The U.S. meat and poultry industry has earned the reputation of being a reliable supplier of safe, high-quality products to these export markets. But the European Union, Australia, and countries in South America are ready to fill the void left by the U.S.’s absence – an absence resulting directly from ocean carriers’ nefarious actions. Once foreign competitors seize previously held U.S. market share, it becomes increasingly difficult, if not impossible, to recapture the same level of hard-earned access.

“The U.S. meat and poultry industry counts on these markets to send products that otherwise would not be consumed, or would be consumed in extremely low quantities, by Americans. As a result, the U.S. domestic market would not easily absorb these products, placing undue economic pressure on livestock producers, packers, and processors, and the communities they support. Moreover, it would be cost prohibitive for many of these businesses to reengineer supply chains or to find alternative buyers to fulfill overseas contracts. Continued port disruptions could also undermine the U.S.’s food supply, which relies on imports to fill gaps in U.S. production. This would inevitably curtail consumer choice.

“Because meat and poultry exports are perishable, with a relatively short shelf-life in the case of chilled meat products, the decision by ocean carriers to cancel export bookings or bypass carrying U.S. agriculture products altogether is particularly consequential. These exports cannot withstand extensive disruptions or delays, and should not be forced to if there is sufficient space available on a vessel. Yet, often ocean carriers are departing U.S. ports with vessels loaded at less than 50 percent capacity – a stark contrast to the near 100 percent capacity observed on vessels making the journey to the U.S. These cancellations and delays are costing U.S. meat and poultry companies millions, as they are forced to downgrade, discard, or divert product in the case of exports, and source from non-traditional suppliers at extremely high prices in the case of imports.

“Those costs are compounded by excessive and unreasonable detention and demurrage fees assessed on U.S. importers and exporters by ocean carriers and marine terminal operators for the failure of these importers and exporters to either retrieve a container from a marine terminal or return one within a specified amount of time. The Federal Maritime Commission (FMC) has found that ocean carriers and marine terminal operators regularly issue these costly penalties even if delays in retrieving or returning containers are beyond the control of the importer or exporter. Although the FMC has deemed such charges to be “unreasonable,” and in violation of the Shipping Act, ocean carriers and marine terminal operators have faced few, if any, consequences for imposing these exorbitant, punitive costs. The Meat Institute, along with many of its counterparts in the agriculture sector, supported FMC’s investigation Fact Finding No. 29, “International Ocean Transportation Supply Chain Engagement,” to address ocean carriers’ predatory or unreasonable behavior, and its attendant Interpretive Rule setting forth guidelines for detention and demurrage. It is now essential that FMC be granted the proper authority to enforce this rule and stem the practices it identified that continue to hamper U.S. agricultural trade.

“Taken together, the costs outlined in this testimony have forced smaller businesses that rely on trade, both imports and exports, to shutter, and have cost the U.S. agriculture sector more than $1.5 billion in lost revenue. In the process, jobs have been lost, wages depressed, and communities gutted. As the U.S. emerges from the economic hardship inflicted by the COVID-19 pandemic, our farmers, ranchers, agricultural producers, manufacturers, and food industry workers need functioning ports, and the access to export markets and critical inputs they afford.

“NAMI appreciates the attention this issue has garnered in Congress, including the strong bipartisan support for a resolution to many of the concerns described in this testimony. More urgent action is necessary to ensure the continued competitiveness of U.S. agriculture exports abroad and to preserve the jobs of millions of hardworking Americans employed by the trade-dependent agriculture sector and meat and poultry industry. The ambiguity of FMC’s authority to apply enforcement measures in response to abusive ocean carrier practices has only accelerated the carriers’ exploitative behavior. Granting the FMC explicit statutory authority to enforce its detention and demurrage rule could help stem future abuses. American importers and exporters would also benefit from efforts to shift the burden of proof to carriers and terminals to confirm detention and demurrage charges comply with FMC’s rule. It is equally important to prevent ocean carriers from declining export cargo bookings if such cargo can be safely loaded on vessels in an appropriate timeframe; the fate of U.S. agriculture exports should not solely be determined by carriers. Addressing this crisis not only involves holding ocean carriers accountable for their actions, it also requires improving port efficiencies, including expanding the hours U.S. marine terminals operate and ensuring an adequate supply of labor to staff the additional gate hours. The Meat Institute is ready to work with members of Congress on solutions to these concerns. ”

For the full testimony go here.