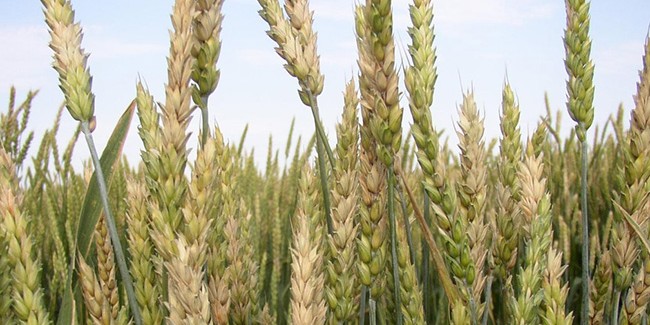 URBANA, Ill. — Illinois wheat growers, take heart. A new University of Illinois study shows no evidence of a highly toxic Fusarium head blight (FHB) variant, known as NA2, in the wheat-growing region of the state. The study also reinforces the effectiveness of wheat resistance to the fungal disease.

“The fact that we didn’t find any signs of the NA2 population in central and southern Illinois is good news for growers. It seems the pathogen is not very well adapted to warmer climates. For the time being, we think all the FHB out there is the NA1 type,” says Santiago Mideros, assistant professor in the Department of Crop Sciences at Illinois and co-author on the study.

The study, published in the journal Mycologia, used a field pathogenomics approach to identify the types of FHB on wheat of different resistance levels growing in Brownstown, Carmi, St. Jacob, and Savoy. The method skips several time-consuming steps; traditionally, fungal diseases need to be isolated and grown in the laboratory before genetic material can be extracted and analyzed. In the new method, scientists extract all the RNA in the wheat sample – fungus and plant together – and compare with the published genomes for wheat and Fusarium.

“This tool allows us to monitor almost in real time. It means very fast identification of the pathogen in the field – whether it’s present and what type is there,” Mideros says. “The method hasn’t been used that much – this is the first time anyone has used it for FHB. My goal is to try to produce tools for precision management of plant diseases. To be able to do that, we need to know more about the pathogen.”

As noted, Mideros and his research team found only the NA1 variant of the pathogen. And although the pathogen was found on wheat of all resistance levels – susceptible, intermediate, and resistant – there were no significant genetic differences among the fungi on the three types.

Finding the NA1 pathogen on intermediate and resistant wheat varieties doesn’t sound good, but Mideros says resistance is working to slow the progression of the disease. “Resistant varieties might have some disease, but there will be less overall at the end of the season. It is good in that aspect. It helps.”

Mideros says his results also show no evidence of an “arms race” between the resistant host and the pathogen. In many cases, when we use resistant hosts, pathogens evolve ways to sneak around the resistance mechanism and cause disease. That doesn’t seem to be happening here. If it were, the research team would have detected changes in key genetic sequences in fungus on the resistant wheat.

That said, the team did find a few small genetic differences in fungus growing on the three resistance types of wheat. So far, the differences don’t seem to add up to an evolutionary benefit for the fungus. Instead, Mideros says researchers could take advantage of these genetic anomalies, using them as targets in future breeding or management programs.

Ultimately, the study provides a more complete view of the pathogen’s diversity in central and southern Illinois.

“Usually people don’t pay that much attention to plant pathogen diversity after it causes a disease,” Mideros says. “With human medicine, we do. Before, people would just say you have the flu, now they’re starting to say influenza A or B. That just started happening in the last couple years. As we’re getting more precise about who our enemy is, we can start developing the tools to fight it.”

The article, “Field pathogenomics of Fusarium head blight reveals pathogen transcriptome differences due to host resistance,” is published in Mycologia [DOI: 10.1080/00275514.2019.1607135]. Study authors include Leigh Ann Fall, Melissa Salazar, Jenny Drnevich, Jessica Holmes, Meng-Chun Tseng, Frederic Kolb, and Santiago Mideros. The research was supported by the U.S. Department of Agriculture and was a cooperative project with the U.S. Wheat and Barley Scab Initiative.

Fungicide decision near for Indiana wheat
May 26, 2020