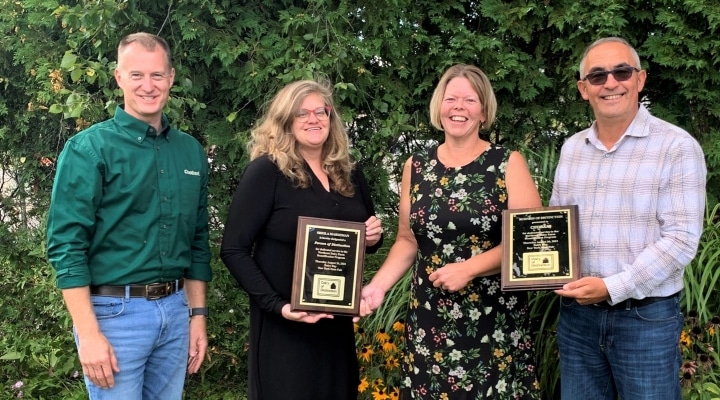 Sheila A. Marshman, PhD, an Associate Professor of Agricultural Business at Morrisville State College, was presented the Person of Distinction Award. During Dr. Marshman’s tenure at MSC she fostered the college’s four-year degree in Agricultural Business Development and is currently co-writing the college’s first Master’s Degree, a MS in Food and Agribusiness. In 2016 she was awarded the SUNY Chancellor’s Award for Excellence in Service.

In 2015, Marshman joined the consulting team of NY FarmNet, based out of the Dyson School at Cornell University. She helps farm families across NYS make financial decisions and plan for their future through succession/estate planning. Marshman also serves on the Board for the Development Chenango Corporation, the NBT Bank Southern Tier Regional Advisory Board, The New York State Promotion Order Board, and the New York State Agricultural Foundation Board. She is also a graduate of LEADNY class 11.

She resides with her husband, John, and their daughter, Lily, on his family’s 7th generation dairy farm, Tiger Lily Holsteins, owned by John, David, and Corey Marshman which was founded in 1856. Marshman is active in many local organizations including youth softball and 4-H. Sheila was also closely involved in dairy product give away efforts at both the college and in Chenango County.

This year’s Business of Distinction Award was presented to Chobani. holds a significant presence in New York’s dairy industry. Chobani’ s presence is recognizable not only on grocery store shelves but also in contributions made at the farm level. Chobani is the only dairy processor to approach Cornell CALS Pro-Dairy Program with an interest in contributing monies towards programs that impact dairy producers.

In the past Chobani has contributed to the Dairy Advancement Program; allowing funds to be awarded for business planning efforts at the farm level. Most recently, this business partnered with American Farmland Trust to award 22 NY dairy farms micro grants through the Dairy Forward partnership utilizing proceeds from Chobani’ s Farmer Batch yogurt.