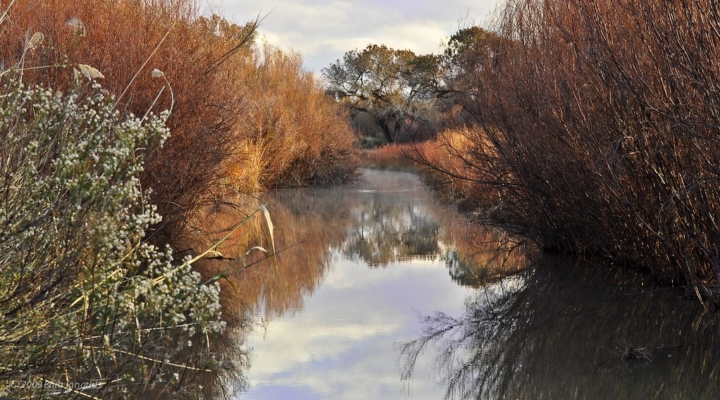 National climate experts have been watching and waiting but El Nino continues to tease, leaving New Mexico and the rest of the American Southwest to hang on longer until the weather pattern develops and brings more moisture to the drought-stricken region. (Barb Ignatius, Flickr/Creative Commons)

ALBUQUERQUE, N.M. (AP) — The irrigation canals are all but dry as farmers along the Rio Grande set in for winter, holding out hope that El Nino will develop and save them from what could otherwise be another dry start to the next growing season.

The irrigation district that serves farmers in southern New Mexico already has issued a warning that next year’s allotment could be as little as a few inches (10 centimeters) of water.

Elephant Butte, the largest reservoir in the state, bottomed out at just 3 percent of capacity at the end of September. While there has been a slight uptick since then, that marked the lowest since the early 1970s.

It will likely be late spring before the Elephant Butte Irrigation District begins to release water to farmers in the Hatch and Mesilla valleys — home to countless pecan orchards and crops of chile and onions.

National climate experts have been watching and waiting but El Nino continues to tease, leaving New Mexico and the rest of the American Southwest to hang on longer until the weather pattern develops and brings more moisture to the drought-stricken region.

King is not optimistic about the development of a wetter-than-average pattern for southern New Mexico. He said the region has endured 16 years of drought and it looks as if 2019 will continue to bring further challenges with low water supplies.

The federal drought map released Thursday shows the situation has improved in a small portion of northern New Mexico and along the Rio Grande corridor, but the Four Corners region and the southern Colorado mountains that feed the river are still dealing with extreme to exceptional drought.

The Rio Grande marked some record-low flows this year, prompting federal officials to partner with the largest water utility authority in the state and others to keep the river flowing at least through the Albuquerque stretch.

Another concern heading into the start of winter is warm temperatures, which could affect the amount and longevity of the region’s snowpack.

Forecasters with the National Weather Service in Albuquerque report that Albuquerque is tied so far for the seventh warmest year on record and New Mexico as a whole is third warmest on record for the first 11 months of the year.

Predictions include a higher probability that temperatures could be warmer than normal through February.

Eastern New Mexico is bracing for wind and high temperatures on Friday, a combination that forecasters say could result in critical fire weather conditions. They say afternoon highs could soar up to 20 degrees above normal.