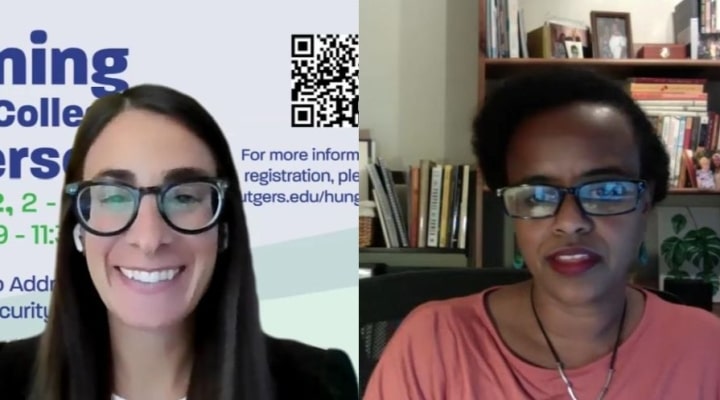 NEW BRUNSWICK, N.J. — On Feb. 10 and 11, policymakers, school administrators, faculty, staff, students and community members attended the online conference, “Envisioning Hunger-Free College in New Jersey.” The conference, which focused on addressing student food insecurity at colleges and universities in New Jersey, was funded by the Office of the Secretary of Higher Education and hosted by Rutgers Cooperative Extension and the Division of Student Affairs, in partnership with Hunger Free New Jersey. Among the more than 300 participants and speakers were New Jersey Assembly Speaker Craig Coughlin, Secretary of Higher Education Brian Bridges, and Deputy Commissioner Elisa Neira, New Jersey Department of Human Services.

Cara Cuite, assistant extension specialist with Rutgers Cooperative Extension, in the Department of Human Ecology, was a key organizer of the event.

“Our goal for this conference was not only to spread awareness about college student food insecurity, but to deepen attendees’ understanding of this as a social justice issue. We also hoped to build connections and encourage collaborative approaches among institutions across the state, since there are so many innovative programs happening all over New Jersey.”

“Addressing student food insecurity necessitates a campus and community-wide approach that requires support from inside and outside of institutions of higher education. ‘Envisioning Hunger-Free College in New Jersey’ provided that rare opportunity for students, faculty, administrators, policy makers, and government officials to collectively address this critical issue.”

The first day of the conference featured welcome remarks from Rutgers President Jonathan Holloway and New Jersey Governor Phil Murphy. These were followed by a keynote address delivered by Rashida Crutchfield, associate professor in the School of Social Work, California State University, Long Beach, who serves as the executive director for the Center for Equitable Higher Education. Crutchfield focused on the prevalence of basic needs in security within the California State University system, highlighting the ways that student food and housing insecurity disproportionally affects students of color and other groups that have been systemically marginalized on college campuses.

In addition to describing the scope and severity of basic needs insecurity, Crutchfield’s compelling keynote also challenged attendees to consider how to make meaningful investments in efforts to address student basic needs insecurity. Among her many recommendations were a call for institutions of higher education to curate partnerships with community-based organizations and a recommendation to develop creative campaigns to remove the stigma that is often associated with accessing campus or community resources. Interweaving the voices of students throughout her presentation, Crutchfield’s thoughtful remarks propelled meaningful conversations among attendees as they contemplated what hunger-free college in New Jersey may entail.

Secretary of Higher Education Brian Bridges discussed the NJ Hunger Free Campus Grants Program to begin the second day of the conference. He was followed by a panel that included champions of anti-hunger policy and advocacy, including Assembly Speaker Coughlin; Adele La Tourette of Hunger Free NJ; Deputy Human Services Commissioner Elisa Neira; Jake Farbman of NJ Success, and a team from the Hope Center for College, Community, and Justice and the Office of the Secretary of Higher Education. A second panel highlighted innovative programmatic approaches to address campus food insecurity at Ocean County College, Kean University and Rutgers–New Brunswick.

Cara Cuite, who has led two basic needs insecurity surveys among students on the Rutgers–New Brunswick campus—one in 2016 and more recently in 2019­—summed up the hopes of the conference organizers.

“Ultimately, we hope that as a result of the conference, participants are able to envision hunger-free college in New Jersey and to identify ways that we can work collectively to make that a reality.”