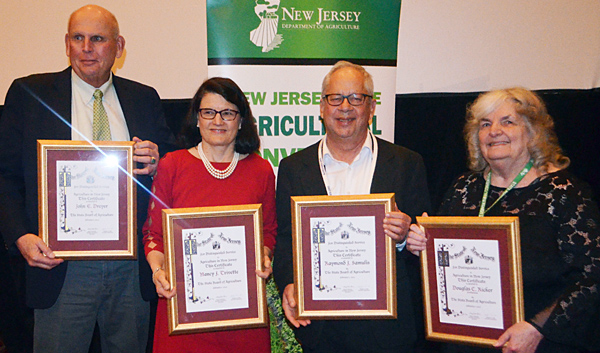 “The influence each of these people have had in their specific sectors of agriculture, both in New Jersey and nationally, is an outstanding example of the dedication and excellence of the industry in our state,” said New Jersey Secretary of Agriculture Douglas H. Fisher. “John Dreyer was a pioneer in direct marketing, Douglas Ricker spent much of his career promoting and educating others about the dairy industry, Ray Samulis is respected nationally for his work with sweet corn and farm safety and Nancy Trivette has and is still serving as a leader with national ag education organizations. We thank them for their countless contributions.”

Dreyer has used his decades of experience to make Dreyer Farms a true destination location in Union County. John began working at his family’s farm stand as a youth in 1954. The stand was first opened by John’s mother, Henrietta, in 1946. John’s father Henry, and brother, Henry Jr., also played significant roles in the farm market’s development. In recent years, John has been at the forefront of market trends by encouraging Community Supported Agriculture, Farm to Table and Agritourism. The Dreyers hold many events on the farm that customers can participate in and they are always well attended.

During the growing season, 40 varieties of tomatoes will be on market shelves, while 150 different types of seedlings go from Dreyer Farms’ 12 greenhouses to customers who prefer to grow their own. Many of the varieties are heirlooms, all of which are hand-picked from 15 seed catalogs that Jessica and her father, John, review each year before selecting varieties for the following season.

Ricker, who passed away this past September, was a lifelong resident of Sussex County and had a major influence on New Jersey Agriculture. He was a self-employed dairy farmer for his entire career and served on the State Board of Agriculture from 1990 to 1994. Doug and his brother Walt were each born on the family farm, which was purchased by their parents, Herman and Dorothy Ricker in 1929. In 1955, Herman Ricker and Sons was created and then in 1970 another barn with a milking parlor was built and the Ricker Brothers was formed. The Rickers also hosted a dairy open house at their farm for several years.

Ricker and his wife Joy, to whom he was married for 58 years, were active in Sussex County 4-H for decades. The Ricker family competed in the Open Holstein Show for more than 50 years. Doug was also an avid sports fan and played on the famed Sussex Cardinals baseball team from the 1950s up into the 1970s.

Samulis was a long-time Rutgers Agricultural Extension Agent in Burlington County who retired at the end of 2017. He became known for his expertise with sweet corn and established one of the most comprehensive sweet corn programs over 42 seasons that involved field research, comprehensive training seminars, and marketing research. He was also an advocate for farm safety for much of his career. He has led several seminars on farm safety during the last 15 years and the Cranberry Growers Association gave him an award for being a safety mentor for its industry.

Samulis also established field trials for Padron peppers in New Jersey and was heavily involved in helping cranberry, pumpkin and other vegetable growers with various field trials, playing a key role in making New Jersey a leading producer in the United States in several crops. Ray was raised in Barrington, Camden County, near Cherry Hill and Voorhees, but did not grow up on a farm or in an agricultural setting. That didn’t stop him from having an early interest in agriculture and by ninth grade he knew he wanted a career in agriculture. That led to him working at three different farms and as a landscaper. He went on to earn his Bachelor’s degree in Horticulture from Delaware Valley University and then achieved his Master’s degree at Cornell University.

Trivette has been a champion for Agriculture Education for New Jersey and the United States for more than 30 years. She recently retired as the State FFA Advisor and Food, Agriculture and Natural Resources Education leader from the New Jersey Department of Agriculture. Trivette inspired thousands of FFA members to regularly engage in personal, career and leadership development activities while encouraging them to excel as they developed agricultural skills and competencies for the future. She has also been a leader in assisting schools to develop CASE, the Curriculum for Agricultural Science Education.

Nancy was the State FFA Advisor since 1983, first with Rutgers University, then at the New Jersey Department of Education and with the NJDA since 1995. Nancy is a mentor to numerous current and future agriculture teachers in New Jersey and promotes the agricultural education profession as a wonderful career choice at every opportunity. She continues to serve as a member of the National Teach Ag Advisory Board and as the New Jersey State Teach Ag Results state contact.

Organizations who qualify to send delegates to the New Jersey State Agricultural Convention may nominate a state farmer for the Distinguished Service Award. For more information, visit www.nj.gov/agriculture/about/sba/guidelin.html.

Jersey farmers — Some are still working in winter

A Colorful Bromeliad for the Holiday Season
December 1, 2021