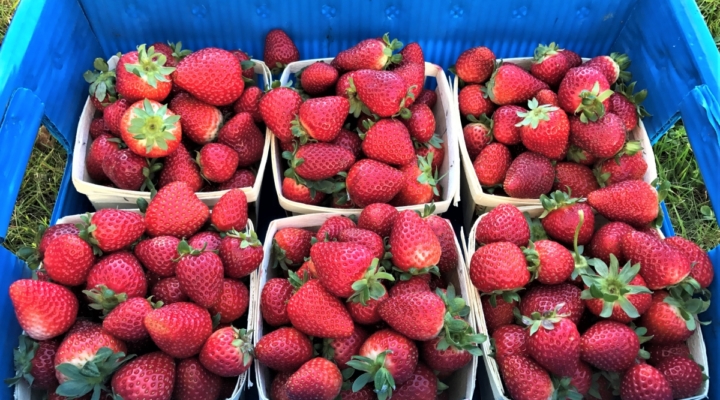 DURHAM, N.H. – New Hampshire Agricultural Experiment Station researchers at the University of New Hampshire have more than doubled the annual yield of strawberries and quadrupled the length of the N.H. harvest season by growing specific varieties of fruit in specific conditions. The new research provides a road map for growers seeking to increase local production during what is normally considered the off season for locally grown strawberries.

The results come at the conclusion of the five-year multi-state TunnelBerries project, which consisted of several experiments at the Woodman Horticultural Research Farm. This particular experiment looked at the differences in yield and quality among specific varieties of day-neutral strawberries, as well as the effect of low tunnel protective structures on yields and plant growth.

“Our study shows that local strawberries can be grown from early summer through late fall in our area. This is yet another illustration of the diversity of crops that can be grown in this part of the country during months that were previously considered the off-season,” said Kaitlyn Orde, research associate who worked with experiment station researcher Becky Sideman, professor of sustainable agriculture and food systems and UNH Cooperative Extension professor and specialist in sustainable horticulture production.

They found strawberry variety had a significant effect on marketable yield, the percent marketable yield, runner initiation, fruit sugar content, and plant size. Depending on the variety, annual total yields ranged from 7,600 pounds per acre to greater than 14,000 pounds per acre. These results were obtained using a relatively low planting density; the authors estimate that yields could be increased further if plants were grown at slightly higher planting densities.

“Given that New England growers recently have reported average annual yields of 5,900 pounds per acre to the USDA, these are quite competitive yields for our region. Albion, San Andreas, and Monterey were the highest-yielding varieties in our study, and the fruit sugar content was greatest in Albion and Monterey in both years. It also was high in San Andreas, Seascape, and Sweet Ann,” Orde said.

Critical to the success of the project was the use of day-neutral varieties of strawberries. Most New England and New Hampshire strawberry growers plant June-bearing strawberries, which are strongly affected by day-length and only initiate flower buds under short-day conditions, resulting in a brief period of fruit production each year.

“While June-bearing varieties are very productive over a short harvest season, they inherently limit availability of regionally produced strawberries during the remainder of the year, so instead, we import strawberries from elsewhere,” Orde said.

Unlike June-bearing strawberry varieties, day-neutral strawberries are less affected by day-length, which means the plants will continue producing flowers and fruit from spring to fall. “Both researchers and several growers have successfully grown day-neutral varieties in our region and have found them to be high quality and high yielding. However, prior to our work, there were no replicated studies in northern New England,” Orde said.

Orde and Sideman also found that low tunnels reduced runner initiation for several varieties. “Together, we found that plants grown under low tunnels required less labor for the removal of cull fruit and runners, and produced a higher percentage of marketable yield,” Orde said.

Researchers plan to publish data on winter survival and second-year spring yield from these same day-neutral varieties for those interested in over-wintering plants similar to a June-bearing system. “We are always searching for new crops and growing methods that can help our local farms find a niche in the market,” Orde said.

Additional resources available for growers are available from UNH Cooperative Extension and HortTechnology:

This material is based upon work supported by the NH Agricultural Experiment Station, through joint funding of the National Institute of Food and Agriculture, U.S. Department of Agriculture, under award number 1006928, and the state of New Hampshire, and the Specialty Crops Research Initiative ​under award number 2014-51181-22380. Additional support was provided by UNH Cooperative Extension, New Hampshire Vegetable and Berry Growers’ Association, and the U.S. Department of Agriculture Northeast Climate Hub.

With food service down, farms look for new markets
April 14, 2020