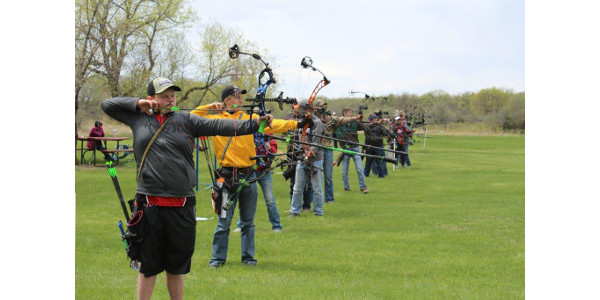 Senior archers were required to participate in 3-D, World Federation field archery and the half-field round of National Federation Archery Association archery. Each archer’s cumulative scores from the three events determined whether he or she advances to national competition. The top four archers will compete in the 2018 4-H National Shooting Sports Championships in Grand Island, Neb.

The 3-D archery event consisted of barebow and freestyle divisions. Participants scored 30 3-D animal targets, with one arrow shot at each, for a complete round and total score of 300 points. The yardages compensate for participants’ age, with seniors shooting a maximum of 50 yards, juniors 35 yards and beginners 25 yards in 3-D and field archery. The total score for field archery is 200.

The World Federation field archery competition was for seniors only. The course has four shooting distances marked from 30 to 60 meters, with a total score of 400. Seniors must compete in all three events.

The top four seniors who are advancing to the national championships are Kail Larsen from Stark-Billings County, Landon Sprague and William Peckham from Stutsman County, and Thomas Mitchell from Pembina County. The alternate will be ShiAnne Boehm from Morton County.

Here’s how they placed individually:

Individual winners in the senior barebow 3-D competition were:

No teams competed in field archery.

The junior freestyle division team from Ramsey County placed first in the 3-D competition with a cumulative score of 626. Members were Thomas Graue, Emily Tjelta, Caline Boline and Benjamin Vetsch. Individual scorers were:

The top team in junior division freestyle field archery was from Ramsey County. Members of the team were Emily Tjelta, Zachary Wood and Savanna Lebrun. Individual winners were:

Individual winners in the junior barebow field archery competition were:

No teams competed in field archery.