Home / North Dakota / N.D. leaders experience 4-H livestock showmanship
A new user experience is coming! We'll be asking you to login to your Morning Ag Clips account March 1st to access these new features.
We can't wait to share them with you! Read more here. 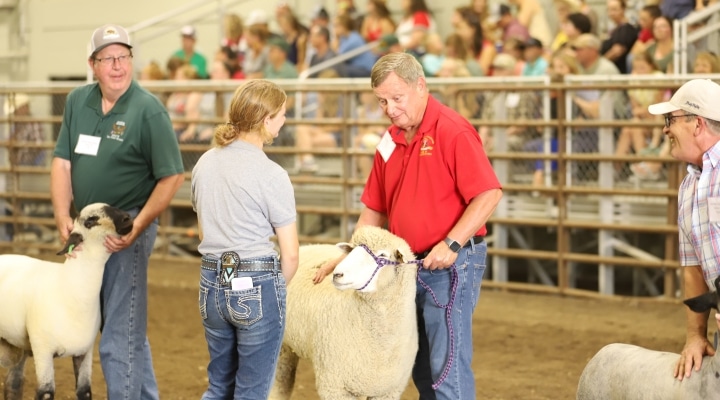 Editors Note: This release has been updated to correct the county for Paige Zimprich. She is from Ransom County.

FARGO, N.D. — Several state leaders got a first-hand look into the world of 4-H livestock showmanship [Friday July 30, 2021] as they tried their hand at showing livestock, with 4-H youth as judges, at the North Dakota State Fair in Minot.

Just prior to the North Dakota Leaders 4-H Showmanship Contest, a leader was paired with each of the 24 4-H’ers who won champion or reserve champion at the intermediate and senior level in showmanship for six livestock species at the State Fair this week. The youth gave their leader tips on how to show a specific species of livestock, then the 4-H’ers served as the judges for the leaders’ efforts.

“It’s a good opportunity to share knowledge and learn how to teach others,” says Morton County 4-H’er Baily Kunz.

“Hopefully, they learned a lot from the experience,” says Caleb Schwab, a 4-H member from Ransom County. “There’s more to learn about 4-H than what I could teach them in the time we had together.”

The state leaders who took first place in the event were: