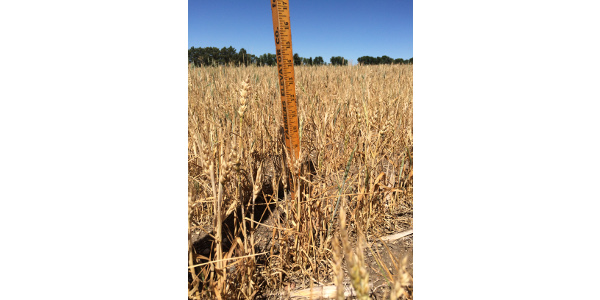 Several heads of this drought-stressed wheat crop in Sheridan County have no kernels. (NDSU photo)

The U.S. Drought Monitor published July 20 shows more than 6 percent of North Dakota is in an exceptional drought.

“This is the first time since Aug. 15, 2006, the state experienced the ‘exceptional drought’ status,” Akyuz says.

The only counties that are drought-free in the state are Grand Forks and Nelson, and parts of the counties adjacent to them. This area of northeastern North Dakota received near-average rainfall during the last 90 days, according to Akyuz.

Since the onset of the drought in mid-May, dry locations continued to stay dry. Based on the accumulated rainfall since March 1, Bismarck received only 4.47 inches of rain, making March 1 to July 20, 2017, the fourth driest since record-keeping started in 1875.

Conditions in eastern North Dakota were not as dire. Fargo, for example, received 6.09 inches of rain during the same period, making it the 15th driest March 1 through July 20 since record-keeping started for Fargo in 1881.

“Dry soil is causing air temperatures to be higher than they would be if the soil were moist,” Akyuz says. “Warm air temperature is increasing the moisture demand for the air, causing the soil to parch even further. This is a feedback of a wicked cycle that western North Dakota is trying to get out of.

“It is unfortunate that no immediate relief from Mother Nature is on the horizon during the next three-month period,” he adds. “Even if the rains return, it will be too late for the regions experiencing irreversible damage.”