The results of that review are in “Financial Characteristic of North Dakota Farms 2007-2016.” The publication summarizes the performance of more than 500 farms enrolled in the North Dakota Farm Business Management Education program. (Jerry and Pat Donaho via Flickr)

The results of that review are in “Financial Characteristic of North Dakota Farms 2007-2016.” The publication summarizes the performance of more than 500 farms enrolled in the North Dakota Farm Business Management Education program.

“The study is useful to producers who would like to compare their farm financial performance with farms that have similar characteristics,” says Andy Swenson, North Dakota State University Extension farm management specialist.

“Financial performance in 2007-2012, excluding 2009, was superior to other years in the 2007 through 2016 period,” says Swenson. “Overall performance was best in 2012 and poorest in 2015, which had the lowest net farm income, rates of return on assets and equity, repayment capacity and financial efficiency measures in the 10 year period.”

In North Dakota, livestock farms (mainly beef cow-calf operations) and farms with high crop land ownership tend to have lower revenue relative to the value of farm assets. Young farmers should use the solvency of the young producer group as a benchmark because older farmers tend to have better solvency than young producers, according to Swenson.

The Red River Valley region and crop farms typically have stronger profitability, solvency and repayment capacity than other regions and farm types, respectively, but not in 2013 and 2014, the study showed.

Farms in this study are larger and the age of farm operators younger than the state average. In 2016, there were 29,800 farms in North Dakota. Only 10,500, or 35 percent, had gross receipts greater than $500,000, whereas 53 percent of the 531 farms in this study exceeded that sales volume. The average age of the farm operators was 46, compared with a state average of 57.

The “Financial Characteristics of North Dakota Farms” publication is available online at http://bit.ly/NDFarmReview or by request from the NDSU Agribusiness and Applied Economics Department at 701-231-7441. 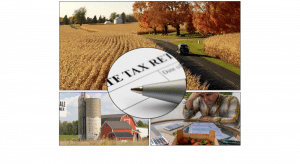