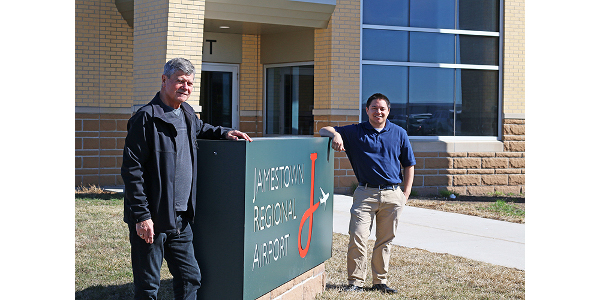 Jamestown Regional Airport Authority Chairman Jim Boyd, left, and Airport Director Sam Seafeldt pose in front of the airport, which saw a record number of boardings in 2016. Jamestown, as well as Dickinson and Devils Lake, is in danger of losing  Essential Air Service funding after President Donald Trump announced he cut the program as part of his budget to Congress. (Courtesy of North Dakota Farm Bureau)

The plan, announced in March, eliminates EAS as part of an overall cut of $2.4 billion to the Department of Transportation, a 13 percent reduction in its budget. That means airports in Jamestown, Dickinson and Devils Lake could face serious funding problems.

“EAS flights are not full and have high subsidy costs per passenger,” Trump’s budget plan reads. “Several EAS-eligible communities are relatively close to major airports, and communities that have EAS could be served by other existing modes of transportation.”

The EAS program “is funded from overflight fees paid to FAA by foreign aircraft that transit U.S. airspace without landing in or taking off from the United States,” according to the Congressional Research Service. The total cost of the program was $283 million in 2016, with $175 million being subsidized by the federal government.

Excise taxes and other fees make up more than 87 percent of the Federal Aviation Administration’s budget out of a pool of money called the Airport and Airway Trust Fund (AATF), which totals nearly $3 billion. From this fund, the Department of Transportation directs the specific funding from overflight fees to EAS.

Those in leadership positions at airports in Jamestown and Dickinson said they continue to work to educate the public on where much of the money from airport projects and costs comes from. Other than a portion of EAS — which is paid to the airline carriers serving the airports — the funding is largely paid for out of the AATF and not from the wallets of taxpayers.

“Folks think this is something we can save money on so they take a run at it,” said Jim Boyd, chairman of the Jamestown Regional Airport Authority. “This trust fund is slated for aviation-related business.”

“It’s a huge misconception that this is a strain on the American taxpayer,” Braun said. “We have 50-seat regional jets, and (airlines) only get a subsidy for 19 or 20 seats.”

North Dakota Farmers Union has policy in regard to the state’s airports: “We urge that airline service to our cities be maintained and improved.”

EAS funding has been a big part of the growing success in Jamestown and Dickinson. Jamestown took $2.8 million in funding while Dickinson and Devils Lake each utilized around $4 million. Dickinson, in particular, actually had 60,000 boardings in 2014, when the oil boom peaked and flights to Denver were packed. However, that number dropped with the “bust” and Braun said he feels the airport’s 2016 number of 16,795 represents sustainable growth.

“We wouldn’t be able to achieve that number of passengers without that subsidy,” Braun said. “(EAS) allows us to have commercial service in Dickinson. When the boom happened, we were able to forgo that subsidy. When the boom turned into the bust, we went back on EAS, and it’s acting as a safety net for us until the economy picks up. We hope that subsidy will no longer be needed. Dickinson stands as a poster child for how well this program works.”

Once an airport crosses the 20,000 boardings threshold, it’s no longer eligible for EAS funding.

Jamestown and Devils Lake aren’t as close to that milestone as Dickinson is, but both airports saw record boardings in 2016.

“I think this is one of the success stories (for EAS),” Boyd said.

But what would happen if Trump did cut EAS funding? It’s unclear where the overflight fees that make up the $108 million that aren’t subsidized by the federal government would go.

Sam Seafeldt, director of the airport in Jamestown, said it would be difficult to maintain the airport as is without EAS funding, meaning tough decisions would have to be made.

“A lot of people here would have to find somewhere else to work if EAS did get cut, but we’re confident we can keep it going,” he said.

While Boyd said cutting the funding wouldn’t necessarily be a death knell for the airport, it would make it more difficult to have commercial service.

“We would work feverishly to go to Plan B and talk to (carrier) SkyWest and maybe they can find a way to come in here with one airplane a day (rather than two),” Boyd said.

In an effort to make sure there is continued funding – which both airport managers said always seems to be on the chopping block – a task force has been called into action. It includes the state’s congressional delegation in Sens. Heidi Heitkamp and John Hoeven and Rep. Kevin Cramer, as well as Gov. Doug Burgum.

Heitkamp and Hoeven have both released statements supporting EAS in 2017.

“EAS has always received bipartisan support,” Braun said. “There are industries that use these flights like agriculture, natural resources exploration, oil and gas development, medical, college, manufacturing — the economic input of those industries is a tangible thing.”

“It’s really critical for economic development,” Boyd said. “We have the desire to grow. If we don’t have good reliable commercial service, we’re gonna have a hard time enticing new businesses to move here.”