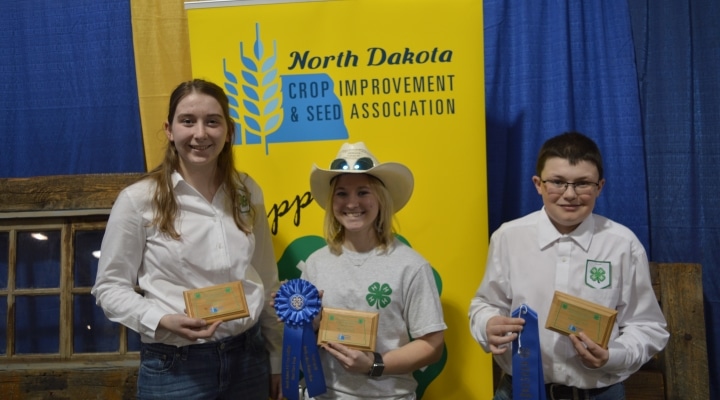 The contest is held in conjunction with the state crop show held at the North Dakota Winter Show.

Team members are Laura Muggli of Carson, Olivia Throener of Cogswell and Wyatt Kessel of Belfield. Coaches of the team are Andrea Muggli, Melissa Seykora and Desirae Tibor.

Laura Muggli placed first individually in the senior 4-H contest with a score of 888 points out of a possible 1,000.

The team from Walsh County placed third with members Andrew Myrdal of Edinburg, Conner Hodek of Fordville, and Owen Zikmund and Jonah Zikmund of Pisek. Brad Brummond coaches the team.

The Cass County team of Kiley Kvamme of Kindred, and Cort McDonald and Claire McDonald of Leonard placed fourth. The team is coached by Kyle Aasand.

In the junior division, a team from Griggs and LaMoure counties placed first. Team members are Rosie Abraham and Amelia Abraham of Hannaford and Leo Lahlum of Marion. Coaches are Jeff Stachler and Eric Lahlum.

Rosie Abraham placed first with the high individual score in the junior division.

The team from Ransom County placed second. Team members are Charlie Dagman and Levi Dagman of Enderlin, Luke Schwab of Englevale and Cody Freeberg of Lisbon. The team is coached by Jerome Freeberg and Travis Dagman.

USDA announces intent to pursue rulemaking on RFID use