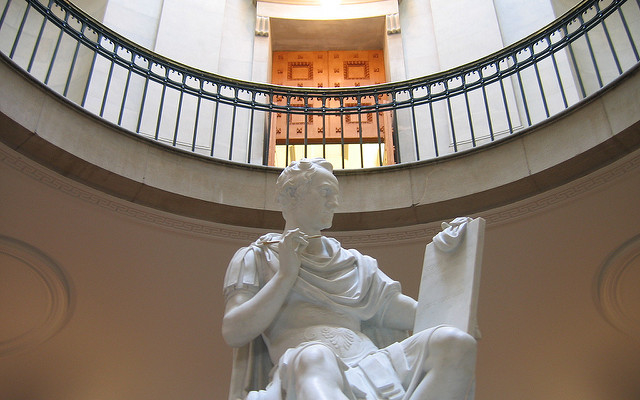 The Center for Public Integrity and The Associated Press found that at least 76 percent of state lawmakers around the country reported outside income or employment in 2015. While that might give lawmakers expertise in certain policy areas, many of those income sources are directly affected by the actions of the legislatures. (photo by Greg Duckworth II, creative commons, flickr.com).

Those rules, largely still in place today, also attempted to more fully describe when lawmakers should avoid casting a vote or pressing for bills that could financially benefit them, their family members or businesses. The conflict-of-interest laws provide some exceptions and don’t necessarily lend themselves to transparency. Some of that is deliberate and the nature of evaluating it can be a judgment call.

The Center for Public Integrity and The Associated Press found that at least 76 percent of state lawmakers around the country reported outside income or employment in 2015. While that might give lawmakers expertise in certain policy areas, many of those income sources are directly affected by the actions of the legislatures.

The review was based on an analysis of disclosure reports from 6,933 lawmakers in the 47 states that required them. It found numerous examples of state lawmakers who have introduced and supported legislation that directly and indirectly helped their own businesses, their employers or their personal finances. The practice is enabled by limited disclosure requirements for personal financial information and self-policing that often excuses seemingly blatant conflicts.

The North Carolina rules say lawmakers can take an official action on legislation if the benefit they would receive from a law is no “greater than that which other citizens of the state would or could enjoy” or “could reasonably be foreseen to accrue to all members of that profession, occupation or general class.”

So it’s OK to vote on legislation that cuts taxes, for example, if the lawmaker would get a break that’s the same as everyone else. The exceptions give leeway to lawmakers to introduce bills that would specifically affect their work and let them draw on their expertise in writing the legislation.

“We’re a part-time citizen legislature, and I have no idea about medicine, so I think it would not be to the state’s best interest for me to start introducing laws about the amount of drugs that we need for anesthesiology,” said Rep. Jamie Boles, a Moore County Republican who operates several funeral homes and a crematory.

Boles and at least one other funeral director have introduced funeral-related bills that would give limited immunity — avoiding financial damages — for funeral homes or their owners should actions of a driver in a funeral procession cause injury or death.

The bills have passed the House by wide margins but have been blocked by the Senate because, according to Boles, “they always think it’s a personal (thing) that just benefits one or two people, but it doesn’t. It protects the industry.”

House and Senate chamber rules allow lawmakers to recuse themselves from voting and must turn in paperwork explaining why. The burden is on the legislator to recognize whether a potential conflict exists or to ask the General Assembly’s bipartisan ethics committee for an opinion.

Lawmakers who fail to raise potential conflicts they might have only reinforce the public’s negative feelings about politicians, even if there is no self-dealing, said Jane Pinsky, director of the nonpartisan North Carolina Coalition for Lobbying and Government Reform.

A farm workers’ group filed ethics complaints in July against two high-ranking legislators — one of which was the bill’s chief sponsor — for a last-minute anti-union amendment in this year’s Farm Act. Both complaints were dismissed by the Legislative Ethics Committee.

The House amendment prohibited farming operations from collecting union dues from organized workers and made invalid any legal settlement that requires a farming operation to enter an agreement with a union.

Bill sponsor Sen. Brent Jackson of Sampson County, whose company grows fruits, vegetables and tobacco, had been sued by several former, unionized farm workers seeking back wages and other financial damages after being fired or not being re-hired. Jackson and his company denied wrongdoing and reached a tentative, $97,000 settlement last fall. Jackson was the Senate’s chief negotiator in the final compromise measure in June that retained the union language.

National Farm Worker Ministry Executive Director Julie Taylor, who filed the ethics complaints, said the anti-union language would give direct financial benefit to Jackson by making it harder for unions to organize and to improve working conditions.

“He helped to propose this legislation,” Taylor said in an interview. “It feels like a terrible conflict of interest.”

But under the law, it isn’t one, according to the Legislative Ethics Committee. The committee’s ruling emphasized that union restrictions applied only to future agreements or settlements.

“Any financial benefit that might accrue to Sen. Jackson as a result of his legislative actions is no greater than that which could reasonably be foreseen to accrue to any other agricultural producer in the state,” the committee’s dismissal states.

Jackson, who was pleased with the ruling, acknowledged in an email the plaintiffs in the workers’ case had tried to get his farm to hire only union workers as part of any settlement, but “unionization was not a condition the company was willing to accept.”