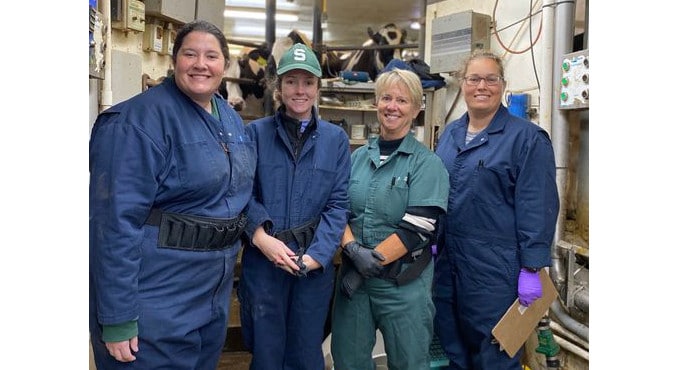 Through a series of studies, MSU researchers have learned that use of antibiotics varies among farms, primarily due to differences in occurrence and treatment protocols for clinical mastitis. Pictured, from the left, are: Quinn Kolar, Juliana Leite De Campos, Pamela Ruegg and Cara Robison. (MSU Extension)

EAST LANSING, Mich. — The focus of much of my current research program is to develop evidence-based guidelines that help farmers and their veterinarians understand when antibiotic usage is both cost effective and beneficial to the animals. Using antibiotics in this manner is called “Antibiotic Stewardship” and adopting principles of antibiotic stewardship on dairy farms can have economic benefits for farmers. Much of our research the last few years has been focused on practical ways to improve antibiotic stewardship on dairy farms and we have performed several studies that together are busting myths about mastitis therapy.

As part of a USDA funded study (USDA NIFA #2018-68003-28151) that started in 2017 (before I relocated to MSU early in 2018), we worked with a team of researchers from the University of Wisconsin-Madison to collect animal health and treatment data from 40 large WI dairy farms that contain >55,000 lactating cows. While the overall objectives were focused on risk factors for exposure of farm workers to resistant bacteria, we also sought to determine how farms varied in usage of antibiotics and what diseases accounted for most antibiotic usage. MSU PhD student Juliana Leite de Campos collected and analyzed this data and published a 2021 Journal of Dairy Science paper (J Dairy Sci, 104:4727-4745) that demonstrated that the number of daily doses of antibiotics per cow per year varied enormously among farms. The least using farms used about 2 daily doses per cow per year, while the greatest using farms used 6 times as much (Figure 1). Antibiotic treatment of dry cows and of clinical mastitis cases accounted for >75% of all antibiotic usage. One take home message from this study was that many farms can reduce antibiotic usage by changing protocols used for mastitis treatments and for dry cow therapy.

Further analysis of this data has been recently performed by MSU post-doctoral research associate Dr. Juliano Goncalves, who used a subset of this data containing about 53,000 cows from 37 herds to look at data about individual cow treatments. In this study, he reported a total of 32,000 first cases of diseases (recurrences were not included). Clinical mastitis accounted for about 44% of all recorded first disease cases (Figure 2; J. Goncalves., J. Leite de Campos and P. Ruegg, 2022 submitted to Journal of Dairy Science). Interestingly, 35% of mastitis cases were not treated with antibiotics and the 2 most common treatments were intramammary administration of ceftiofur (SpectramastLC; 54% of cases) or cephapirin (Today; 6% cases). This proportion of non-treated cases is much greater than previously reported and is a result of farmers adopting selective treatment of non-severe clinical mastitis, often using simple, culture based selective agar to guide treatment decisions. In most selective treatment programs for clinical mastitis, no antibiotic therapy is recommended for non-severe cases that are culture negative or Gram-negative while intramammary antibiotics are recommended for cases that have Gram-positive growth.

While treatments for non-severe clinical mastitis are usually based on use of on-farm culture to identify culture-negative cases (no antibiotics are recommended) and differentiate Gram positive (antibiotics recommended) from Gram negative bacteria (antibiotics not normally recommended), recent advances in diagnostic testing have demonstrated that bacteria that are called “Gram-positive” are not all Streptococci and Staphylococci but may consist of infections caused by a very diverse group of Gram-positive environmental organisms. The approved intramammary antibiotics have not been tested for efficacy against many of these organisms and we don’t know if antibiotic usage is beneficial.

To help answer these questions, MSU PhD student Quinn Kolar recently completed a clinical trial funded by the Michigan Alliance of Animal Agriculture (M-AAA, 19-009). In that clinical trial we enrolled about 250 cases of non-severe clinical mastitis from 4 commercial farms (3 in Michigan and 1 in MN). All enrolled cases were confirmed as caused by Gram-positive bacteria by growth using commercially available on-farm culture plates. In addition to results of on-farm culture, we collected duplicate quarter-milk samples and identified bacteria using advanced methods (Maldi-Tof). The bacteria that were initially identified as “Gram-positive” using on-farm culture were actually a very diverse group of organisms (Figure 3). Approved intramammary antibiotics have only been tested to be effective against the Streptococci and non-aureus Staphylococci species (18%). Thus, the correct duration and effectiveness of antibiotic treatments for >50% of Gram-positive bacteria are not known.

To evaluate the efficacy of current treatments, we randomly assigned the enrolled cows to 4 different interventions: 1. 3 days of intramammary Polymast® (n = 57 cases), 2. 3 days of intramammary SpectramastLC® (n = 52 cases), 3. 8 days of intramammary SpectramastLC® (n = 62 cases) or 4. No treatments at all (n = 25 cases). The results of this study have not yet been submitted for publication but our preliminary analysis showed no differences in bacteriological cure, post-treatment SCC, recurrence of another clinical case or number of days of abnormal milk (Figure 4) among treatments or based on duration of therapy. Cows that received 8-d SpectramastLC® produced slightly more milk than cows in the other groups, but the difference didn’t make up for the greater amount of milk discarded during the treatment period. Based on the results of this clinical trial, it appears that there were no differences among the antibiotics we compared, and we recommend that for routine mastitis treatment of non-severe clinical mastitis producers use the shortest duration of the approved product that is listed on the product label.

Finally, we used our 37-herd dataset to evaluate variation in costs of mastitis treatments on dairy farms. As part of her PhD dissertation, Juliana Leite de Campos demonstrated that farmers spend between about $125 and $300 per case in direct treatment costs (costs of milk discard, intramammary and systemic antibiotics and supportive drugs; Figure 5). Of direct costs, 80% are related to costs of milk discard, which increase as duration increases. Each additional day adds considerable costs without improving outcomes, and many farms can save money by reducing the number of treatment days.

Overall, through this series of studies, we have learned that use of antibiotics varies among farms, primarily due to differences in occurrence and treatment protocols for clinical mastitis. We can reduce costs of treatment and reduce the number of doses of antibiotics used on dairy farms by modest changes to the way that we treat mastitis.

These changes in mastitis treatment protocols can result in considerable savings for the farmer without negatively impacting animal welfare or productivity. To implement these actions on farms requires good detection systems for non-severe cases, as well as the ability to collect and culture milk samples from affected cows. Our ongoing research is focused on development of decision tools that can help farmers identify cows that may not benefit from antibiotic therapy (based on history and other information) and can be managed in a sustainable and cost-effective manner.