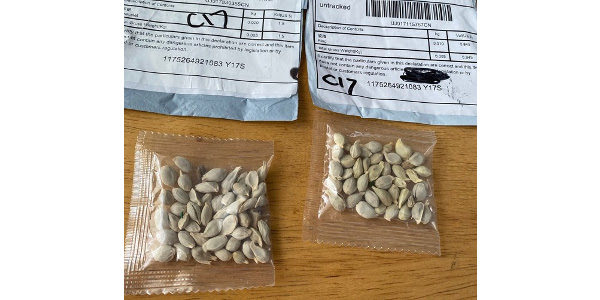 Agriculture officials are warning Virginia residents to take note of suspicious, unsolicited packages of seeds that have been mailed to U.S. households from international origins in recent weeks. Are these seeds an invasive species meant for environmental and agricultural destruction, or something less evil? (Courtesy of MDARD)

WASHINGTON — Let the experts solve this unsettling mystery, and don’t plant any strange seeds delivered to your mailbox.

Agriculture officials are warning Virginia residents to take note of suspicious, unsolicited packages of seeds that have been mailed to U.S. households from international origins in recent weeks. Are these seeds an invasive species meant for environmental and agricultural destruction, or something less evil?

The U.S. Department of Agriculture Animal and Plant Health Inspection Service is working closely with the Department of Homeland Security, U.S. Customs and Border Protection, other federal agencies and state departments of agriculture to investigate the mailings.

“At this time, we don’t have any evidence indicating this is something other than a ‘brushing scam’ where people receive unsolicited items from a seller who then posts false customer reviews to boost sales,” said Osama El-Lissy, deputy administrator of the APHIS Plant Protection and Quarantine program. “USDA is currently collecting seed packages from recipients and will test their contents and determine if they contain anything that could be of concern to U.S. agriculture or the environment.”

The APHIS state plant health director reported more than 300 seed packets have been collected from Virginia residents so far. Evidence suggests the seeds are likely common varieties of herbs and flowers.

“We have identified 14 different species of seeds, including mustard, cabbage, morning glory, and some of the herbs—like mint, sage, rosemary, lavender—and then other seeds like hibiscus and roses,” El-Lissy said. “This is just a subset of the samples we have collected so far.”

Regardless, the USDA and Virginia Department of Agriculture and Consumer Services advise residents who receive seed packets to keep them intact. Don’t open the packets, plant the seeds or throw them in the trash. Instead, place seeds and the packaging in a plastic storage bag, and contact the VDACS Office of Plant Industry Services. A reporting tool and additional information is located on the National Plant Board website. After reporting it, keep the package until state officials contact you with further instructions.

“These may seem harmless, but any seed or plant in the wrong place is a weed and potentially harmful to agriculture and our food supply,” explained Wilmer Stoneman, vice president of agriculture, development and innovation for VFBF. “We’re already dealing with too many variables in our economy. Let’s solve a few.”

Virginia residents who receive unsolicited seeds may file a report with the VDACS plant office at https://unsolicited-seed-packet-reporting-opis-vdacs.hub.arcgis.com/ or by sending an email to ReportAPest@vdacs.virginia.gov.