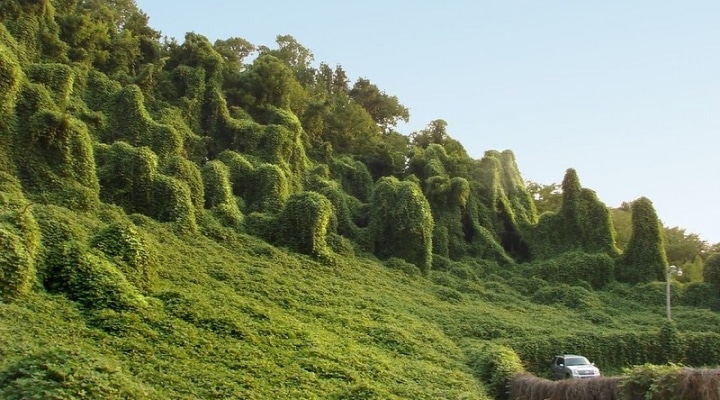 Planting seeds that are unknown can introduce invasive species to a non-native environment. Above: Kudzu overtakes a hillside. (Katie Ashdown, Flickr/Creative Commons)

BLACKSBURG, Va. — U.S. agriculture officials are urging residents who have received unsolicited seeds in the mail from international origins to take warning. Virginia Tech agriculture expert Jacob Barney says that “invasive species are one of the leading threats to native biodiversity globally.”

Barney, an associate professor in the School of Plant and Environmental Sciences, explains that planting unknown seeds could have several potential negative outcomes. They could be poisonous to people, pets, or livestock. They could contain noxious weeds, which are regulated and illegal to import, grow, and distribute. They could be invasive and spread to unwanted locations and harm the local ecosystem, including the native plants and animals.

Planting seeds that are unknown can introduce invasive species to a non-native environment.

“Never plant unsolicited seeds, such as the ones being received by some residents in the U.S. They may contain harmful, noxious, or invasive plants,” Barney said.

Jacob Barney is an associate professor in the School of Plant and Environmental Sciences in the College of Agriculture and Life Sciences. Barney specializes in invasive plant species and works on a diversity of species and contexts to elucidate the causes, consequences, and epidemiology of invasive plant species. His past work included studying the invasive potential of bioenergy crops and is currently working on using Johnsongrass as a model system to study the genetic, population dynamic, and evolutionary potential of a widespread and expanding invader. Other systems include native invaders, ecophysiology, and epigenetics of stress tolerance. Barney is also conducting long-term management projects to identify the feasibility, economic, and non-target impacts of eradication.

"Got milk?" ads make a comeback