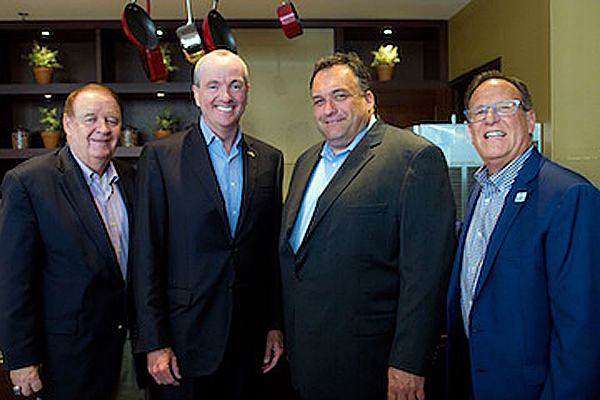 MANALAPAN, N.J. — Phil Murphy sees a bright future for New Jersey’s equine industry and he is eager to play a role in it.

“I think our best days in the racing industry, whether it’s Standardbred or Thoroughbred, and the best days in the equine industry are ahead of us,” said Murphy, the Democratic candidate to succeed Gov. Chris Christie in November’s general election. “But we do need leadership that appreciates that, that understands what you have to do to move that needle, and I’m honored to be raising my hand to do that.”

Murphy, a Monmouth County resident and former U.S. ambassador to Germany, is facing Republican Kim Guadagno in New Jersey’s race for governor. Guadagno has served as lieutenant governor for two terms under Christie.

During a recent visit to the Meadowlands Racetrack, where Murphy presented the Meadowlands Pace trophy to the winning connections of Huntsville, he reiterated previous support for the industry. He called the Meadowlands “a gem in our state” and discussed the need to support the push by New Jersey’s racing and breeding industries to regain a competitive balance with neighbor states that have racino-driven programs.

“It’s one of the principle reasons I supported North Jersey gaming that was on the ballot last year,” Murphy said, referring to an unsuccessful referendum to amend the state’s constitution and expand gaming outside of Atlantic City. “I think that’s one very specific way we can push back on that.

“Frankly, whether it’s in the equine industry or more broadly in our economy, I’m sick of losing out to our neighbors. I’m sick of hearing that jobs went to Pennsylvania or New York, or that people moved to Pennsylvania or New York. New Jersey is one of the most compelling states in the nation. I think with the right leadership this industry, and more broadly the economy in the state, can come roaring back.”

Earlier this year, Murphy met with a large group of horsemen and horsewomen at a fundraiser sponsored by the Standardbred Breeders and Owners Association of New Jersey and TrotPAC, the organization’s political action committee, hosted by Deo Volente Farms.

“There are a couple of industries in this state that we used to own,” Murphy said. “The equine industry is on the list. And it’s high on the list. And (what has happened) doesn’t make any sense.”

“You look at the thousands of jobs, the millions in economic benefit, and the open space benefits that are provided to a state that is the densest state in the nation. Recognizing the importance of this industry to the state, both historically and what it can be again, is not exactly hard to figure out.”

“This is the 41st Meadowlands Pace, and Phil with your help there will be another hundred after this,” Gural said.

“I think the best days for this industry are in front of us,” Murphy said. “I think the future is quite bright.”

In New Jersey's peach country, a season of sweetness