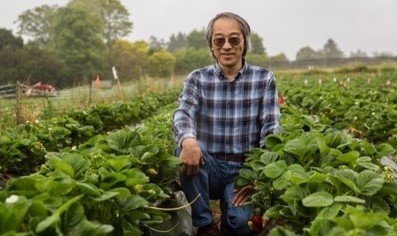 DAVIS, Calif. — For the first time, the University of California has hired a Cooperative Extension specialist dedicated to organic agriculture.

Joji Muramoto, a longtime research associate with the University of California Santa Cruz, will coordinate a statewide program focused on the organic production of strawberries and vegetables. His first day in the new position will be May 29.

Muramoto is highly regarded for the depth of his knowledge of soil science and for his pioneering contributions to the organic production of strawberries—a high-value crop that is notoriously vulnerable to pests and soil-borne disease. He will have a joint affiliation with UC’s Cooperative Extension (CE) and the Environmental Studies Department and the Center for Agroecology and Sustainable Food Systems (CASFS) at UCSC.

CE specialists serve as liaisons between the university and the agricultural sector, building research programs that align with the needs of farmers and conducting collaborative on-farm studies that address problems growers are facing.

“I’m honored and humbled to have this position,” said Muramoto, who plans to focus on soil fertility and the organic management of soil-borne diseases. In his position as assistant specialist, he looks forward to expanding his reach statewide and to coordinating short courses on organic pest management and organic soil fertility management.

CASFS Director Daniel Press said the establishment of an organic specialist is long overdue—and that Muramoto was an excellent choice.

“This is highly visible, public recognition of the significance of agroecology and organic agriculture,” said Press. “It signals to the community of organic growers that we are a partner with them. They know this is for them, and they really love it.”

UC Santa Cruz has played a vital role in the flourishing of organic farming on the Central Coast and beyond, through undergraduate education, training provided by the Apprenticeship in Ecological Horticulture, CASFS, and faculty research projects, many of which Muramoto supported in his capacity as a research associate. Thirty percent of agriculture in Santa Cruz County is certified organic, said Press, who called the figure “astonishing.”

“Joji is an exceptionally accomplished, skilled, talented, and respected scientist,” said Press. “His list of publications is as long as many of my colleagues.’ Now it’s his show. He’s the organic production specialist in the state.”

It is also a sign of the times that UC Santa Cruz was selected to partner with UC’s Division of Agriculture and Natural Resources (ANR) to create this CE position, said Press. Despite its strength in agroecology, Santa Cruz is not one of UC’s traditional “ag schools.” But times are changing, and the Berkeley, Davis, and Riverside campuses are no longer the only hosts of these valued positions.

“We have a long record of important ag research coming out of UC Santa Cruz, but it hasn’t been part of a permanent program or a formal network,” said Press, citingpathbreaking work by his colleagues in Environmental Studies, including Professor Emeritus Steve Gliessman, Professor Carol Shennan, former CASFS Director Patricia Allen, and former CASFS Associate Director Sean Swezey, all of whom Muramoto collaborated with. Most recently, in collaboration with Shennan, he helped pioneer the development of anaerobic soil disinfestation, a biological alternative to fumigants that has become a key strategy in conventional and organic strawberry production in coastal California.

“I can’t overstate the different ways Joji has been engaged with campus research and undergraduate and graduate students,” said Press. “He has played a key role in CASFS research for more than 20 years.”

Muramoto’s commitment to organic agriculture is almost as old as he is. When he was a boy growing up in Tokyo, Muramoto lost his 6-year-old sister to leukemia. His parents were shocked and devastated. Their loss took place when many people in Japan were concerned about pesticide residues in produce, spurred in part by Rachel Carson’s book Silent Spring and the emergence of the organic movement in Japan.

“My mother wanted to do something,” recalled Muramoto. “There was no direct evidence between pesticide residue and cancer, but she didn’t want her daughter’s death to have been in vain, so she joined the early organic movement. She started buying organic produce via the ‘Teikei’ system, which is similar to Community Supported Agriculture.”

During middle school, Muramoto spent school breaks on organic farms in suburban Tokyo. “Organic farmers there told me repeatedly, ‘Soil is the foundation of farming,'” he said. “That’s when I got interested in soil science.”

Today there is much more evidence showing an association between pesticide use and cancer, and Muramoto said, “It is important to increase our efforts to develop agroecological practices to manage pests without using pesticides.”

As a young assistant professor studying soil science at the Tokyo University of Agriculture, a private ag school, Muramoto found it difficult to get support for the work he wanted to do on organic production—while others in his department were well-supported for their work on conventional farming practices, including studies on chemical pesticides. The stress took a toll on Muramoto’s health, and he left the university.

The Central Coast is well known around the world for the high concentration of organic production, and UC Santa Cruz is internationally recognized as a hub of organic activity and expertise.

Muramoto looks forward to building his research program; he hopes to develop ways to measure indicators of soil health, including levels of readily decomposable organic carbon and nitrogen. “Soil health has become a mainstream research topic among soil scientists worldwide, but there’s no regional data for the Central Coast,” he said.

Jim Cochran, founder of Swanton Berry Farm in Davenport, met Muramoto shortly after he arrived in Santa Cruz. Cochran was the first farmer who managed to grow organic strawberries commercially, a success he credits to his collaboration with CASFS researchers, including Gliessman, Swezey, and Muramoto.

“I’m more of an intuitive farmer, but intuition isn’t everything,” said Cochran, who values the curiosity and scientific discipline Muramoto brought to their collaboration. “Science is super important. You don’t want to live by one or the other.”

Soil biology encompasses physics, chemistry, geology, and biology, making it extraordinarily complex, said Cochran. “There’s no magic bullet, but Joji was ready to put a close scientific eye on the complexity of it,” he said. “Joji embraced that complexity. Chemical farming was reductionist.”

Unlike other academics who specialize in a particular segment of a complex problem, Muramoto takes a “holistic approach” to soil science and has kept his eyes on the larger picture, said Cochran. “He’s been able to make some serious progress understanding soil biology, but there’s a long way to go—which is good news for graduate students,” he said. “It’s wonderful to be able to call Joji and ask him what he thinks.”

Benefits for conventional growers, too

Rod Koda of Shinta Kawahara Family Farms has grown strawberries in Watsonville since 1984. He has worked with Muramoto for nearly a decade and attended the “candidate talks” by the three finalists vying for the new organic specialist position. Still, he was “blown away” to learn how long Muramoto has been active in organic research, and the number of researchers across the country with whom he collaborates.

“For me, that was the game changer,” said Koda. “Joji is this quiet, humble guy, but he’s been working all over the place with so many people.”

Koda farms 10 acres conventionally and seven acres organically, and he said “it’s time” for organic to get the support it deserves. But all growers can benefit from paying close attention to soil health, he said.

“Conventional growers, we don’t have fumigants like methyl bromide anymore, so we’ve got to get smarter about how we farm,” said Koda. “Joji is going to be a part of that.”

Koda first started growing berries organically in 2006, steadily adding acreage over the years. “I eased into it, drawn by the sustainability of organic,” he said, adding that organic alternatives to managing pests and controlling soil-borne disease were key to his willingness to make the leap. Muramoto and his colleagues’ focus on maximizing soil health and using the functions of soil bacteria and organisms to suppress soil fungal diseases was eye-opening.

“I’ve learned a lot from Joji over the years,” said Koda. “He’s going to be the conduit that’s going to bring that knowledge to other people—not just strawberry growers, and not just organic growers. Anyone who pays attention will glean some information from his work and his collaborations with other researchers.”