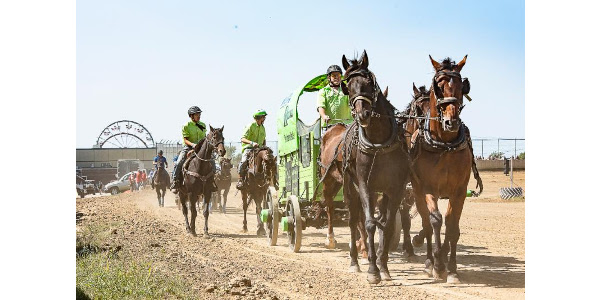 SPENCER, Iowa — The Sleep Number Grandstand will showcase multiple fan favorite dirt events, including the final appearance of chuckwagon races, during the nine days of the 2019 Clay County Fair, September 7-15.

The Chuckwagon Racers of Iowa-Minnesota Association is disbanding following the Fair races, ending a Fair tradition that started in 1962.

“Chuckwagon racing and the Fair have been synonymous for nearly 60 years,” said CCF Manager Jeremy Parsons. “We hope to make their final performances here a highlight as we thank them for entertaining thousands of fairgoers over the years.”

The Antique Tractor Pull will begin at 8:00 a.m. on Tuesday, September 10, and will be free to all fairgoers. The historical pieces of machinery are always a highlight during the fair.

The Casey’s General Store IMCA Blue Ribbon Showdown’s hot laps will start at 6:30 p.m. on Wednesday, September 11. Adult general admission tickets are $15, child general admission (ages 12 and under) tickets are $10 and pit passes are $30. This will be the final night for IMCA class racing for the 2019 season at the Clay County Fair Speedway. IMCA classes include Hobby Stocks, Sports Mods, Modifieds, Stock Cars and Sports Compacts. The night will also feature the IMCA 305 season championship sprint car race.

Tickets for all dirt events are on sale now. Tickets are available online at www.midwestix.com, by phone at 515-244-2771, or in person at the Clay County Regional Events Center Box Office.

Please note Grandstand guest services changes for 2019. Bag checks will be implemented at all Grandstand events at the 2019 Fair. The following items will be prohibited: weapons/firearms, alcoholic beverages not provided by the Fair & Events Center, air horns/whistles or other noisemakers, helium-filled balloons, glitter/confetti, glass bottles, fireworks and illegal substances.

The Fair will also sell beer at selected Grandstand events during the 2019 Fair.

Where do I get weather information?

Conference to support Farm to School