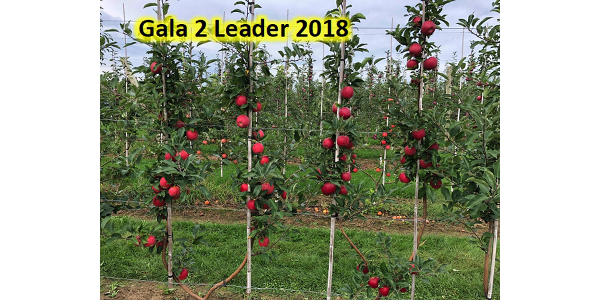 EAST LANSING, Mich. — Modern high-density apple systems vary widely in their design, but the general concept relies on maximizing the number of fruiting uprights on an acre, leading to high yields of superior quality fruit. A fruiting upright, also called a “leader,” is a vertical trunk off of which fruitful lateral wood is produced and is the only permanent part of a modern high-density apple system. These trunks are preserved during dormant season pruning while older lateral wood is stubbed back to encourage the growth of new fruitful wood. The highest quality of fruit comes off of spur-type wood growing laterally from the leader, so more leaders per acre tends to mean more yield and better quality.

Growers and researchers have continued to push the limits on the maximal number of uprights per acre by tightening spacing between trees, rows and pairs of rows in an ever-increasing effort to maximize production. Typically with high-density systems, the term “fruiting upright” or “leader” is synonymous with “tree.” That is to say, if we want 1,800 vertical fruiting uprights per acre, this means we must order 1,800 trees and plant trees 24 inches apart with 12 feet between rows.

Multileader apple production changes this narrative. Rather than thinking about a fruiting upright (leader) as a tree, multileader production utilizes a single grafted rootstock to create two, three, four or more fruiting uprights. These uprights are trained and spaced in the same way as if they were separately planted trees, and once trees fill space on the trellis, they are pruned and maintained in the same manner as a tall spindle orchard.

Why would you consider multileader apple production?

There are several reasons this system has garnered interest from growers in recent years, but one of the chief reasons is the reduction in cost of establishment. As growers purchase an ever-increasing number of trees per acre, the cost of production continues to rise. Multileader apple production reduces initial cost of establishment because it reduces the number of trees required per acre to produce the same (or greater) number of fruiting uprights.

Assuming a generous tree cost of $12 per tree, this means you save $10,800 in trees by planting a bi-axe system at time of establishment. A three-leader tree could be planted at only 600 trees per acre, each tree spaced 6 feet apart, ultimately achieving the same density of 1,800 fruiting uprights per acre while using just one-third of the trees as a single leader tall spindle system. Assuming the same cost of $12 per tree, you would save $14,400 at time of establishment.

Vigor management is another reason multileader apple production has gained interest. Trees in any high-density apple system are pushed hard in the first three years of life in order to fill space quickly and reach the early yields of quality fruit that make the systems profitable. However, excessive vigor is something growers have to fight back in the later years of an orchard’s life after trees fill their space. Vegetative growth in tall spindle, super spindle and other typical high density plantings can be hard to keep in check as orchards age, and excessive vigor is an issue that can manifest itself in a wide array of ways, including reduced fruit quality, increased susceptibility to fire blight and reduced winter hardiness.

Multileader apple systems are not typically as vigorous as single leader trees because the vigor of the rootstock is divided into two, three, four or more separate fruiting uprights. Since each individual rootstock is growing multiple leaders that each demand a share of energy rather than a single central leader, the result in the long run is a calmer and more fruitful tree.

For all its attributes, multileader apple production does have its own issues. One key issue in the system is the delayed time to fill space on the trellis and get the orchard in to production. Since each tree is growing at least two leaders and growth of the multiple leaders starts just a few inches of the ground, it often takes an extra growing season for the trees to fill space and begin cropping. This means another season without profit from a crop, so you must weigh this when considering the system. An extra year to move the system into production may not be acceptable for some growers.

Balancing vegetative growth and fruit production can also be challenging in these systems during the establishment phase. One of the leaders in a multileader tree typically becomes dominant and grows more aggressively while the others are somewhat weaker and less dominant. This will depend on the strength of the rootstock and the number of leaders, but this is a phenomenon that occurs in nearly all multileader orchards. This is challenge during the establishment phase because it creates a high amount of variability in optimal fruit load within trees, leading to high variability within the orchard. This makes standard thinning practices difficult.

For example, if a bi-axe tree has one leader that has mostly filled space and one leader that is lagging behind, the dominant leader could be cropped in the current season, but the lagging leader would need to be de-fruited to encourage vegetative growth in order to fill space prior to cropping. This cannot be achieved efficiently in an orchard with chemical thinners, so it often means hand-thinning passes and careful attention to each individual tree in the orchard during the growing season. Variable dominance is no longer an issue once the orchard has filled its space, but can be a headache for the unprepared grower in the early years.

Is multileader apple production worth trying on your farm?

An ongoing trial at the Clarksville Research Center funded by the Michigan Tree Fruit Commission is underway to help provide answers to growers by comparing two- and three-leader apple plantings with tall spindle and super spindle plantings on several prominent varieties.

The trial was established in 2015 and was cropped for the first time in 2018, so results from this trial are still needed for several more years before any final conclusions can be drawn. However, some early trends are visible that are valuable for growers to consider as they weigh their options. The data show that the yield of the multileader systems is delayed compared to the tall spindle and super spindle systems. This delay is more pronounced in the three-leader trees compared to the two-leader trees because the three-leader trees have more space for each individual tree to fill (more stems per tree). Multileader trees have delayed fruiting compared to tall or super spindle plantings, and growers can expect longer delays as the number of stems per tree increases due to the increased growth demands per tree.

Super spindle has the largest accumulated yield in the first two years of cropping. While this system has the same number of stems per acre as both the two- and three-leader systems in this trial, the stems of the super spindle trees have already filled their space in the trellis, allowing higher fruiting per acre. The stems of the two- and three-leader systems are still growing and filling space, so these systems are not as fruitful on a per acre basis as the super spindle planting in the early years of this trial despite having the same density of stems per acre as super spindle.

Super spindle is also more productive than the tall spindle system because while trees in both systems only have one stem per tree, the super spindle planting has more stems per acre. However, even though the tall spindle system has fewer stems per acre, it is still more productive in the early years than the two- and three-leader trees. This is because each tree in a tall spindle planting is only trained to one stem, allowing the tree to fill trellis space and reach early yield.

The tall spindle planting has fewer stems per acre than the super spindle, two-leader and three-leader plantings, so as the multileader systems come into full maturity, we expect the tall spindle system will fall behind. In general, more stems per acre means more yield per acre, but stems must fill trellis space before they reach full yield. As a result, any planting in which a single tree carrying more than one stem (two- or three-leader) will typically take longer to reach the same yield capacity per acre than a tree carrying only one stem (super spindle, tall spindle), even if the final number of stems per acre in the mature orchard is the same.

It is possible that money saved in controlling tree vigor and an increase in fruit quality make multileader production the best option in the long run, but more years of data are needed to answer this question. It is also possible that the delay in maturity of the multileader systems could be reduced by selecting a more vigorous rootstock for multileader trees, but this is not addressed in these trials. For now, multileader apple production represents a promising direction for Michigan apple growers that will continue to be refined and better understood as more experience with these systems comes to Michigan.