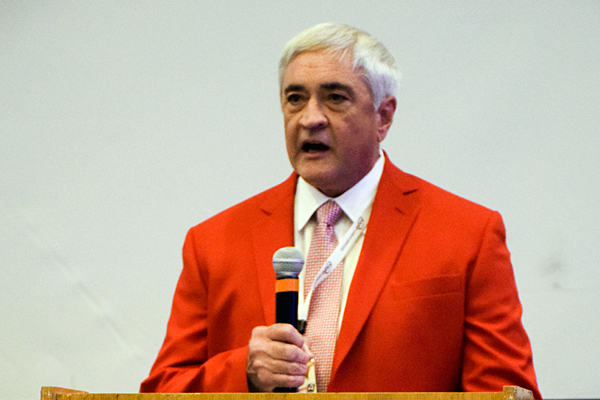 In a speech to attendees of the convention, Muench said it was truly an honor and privilege to be named the president of AAMP.

“I will continue to work diligently to move this association in the right direction,” he said.

A third-generation meat processor, Muench is the president of Louie’s Finer Meats, located in Cumberland, Wis. He attended the University of Wisconsin-Barron County and earned an Associate’s Degree in 1974. He graduated from the Butcher’s Program at SW WI Vo-Tech in Fennimore in 1975. He then continued to attend the University of Wisconsin-River Falls where he earned a Bachelor of Science Degree with a double major in Food Science and Biology.

In May, the University of Wisconsin-River Fall’s College of Agriculture, Food and Environmental Sciences named Muench the 2017 Wisconsin Distinguished Agriculturalist. The award was established in 1970 to recognize individuals who have provided leadership, service and other contributions to the broader agricultural community.

“I could not think of a more experienced meat processor or more qualified individual to guide this association,” said Chris Young, executive director of AAMP. “Louie’s long-time service to the association and to the trade as a whole will allow him to work on the best solutions to the challenges we will face as an industry.”

Muench is heavily involved in his local community. He served as the Scoutmaster of Cumberland’s Troop 24 for 25 years, assisting 28 scouts to achieve the rank of Eagle Scout. He is currently the president of the Cumberland Municipal Utility Commission, as well as volunteers for the Cumberland Area Friends of Scouting.

Muench is married to Barbara and has three children, Louis K., Heidi and Eric, and they currently reside in Cumberland, Wis. His sons, Louis K. and Eric are also actively involved in the business. Louie’s Finer Meats has won nearly 500 awards at the state, national and international competitions for their meat products.