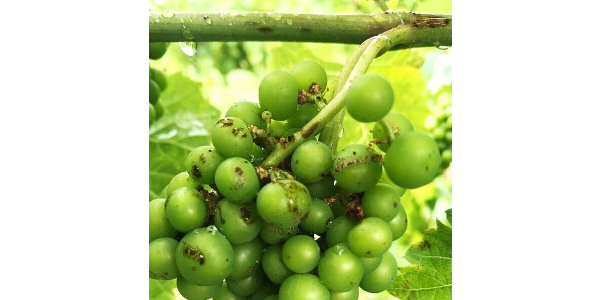 Corking damage on the surface of grape berries caused by early season feeding by thrips. (Photo by Christina Degregory)

EAST LANSING, Mich. — This is the fourth integrated pest management (IPM) scouting report we are sending out for 2019 based on visits to multiple juice and wine grape vineyards. This report will be available every other Wednesday throughout the growing season. There are various insect and disease issues that are highlighted below, and these vary in intensity from site to site and from southern to northern Michigan. This highlights the need to scout your own vineyards. At this time of the season, careful scouting is time well spent to catch any issues that might otherwise develop through the rest of the summer and cause issues with the harvest.

In general, this timing aligns with bunch closure, so if there are disease control applications applied at this timing, this is also a good time for using an insecticide where there is grape berry moth pressure. See the table below for approximate wild bloom dates in your county. If you have been keeping an eye on wild grape bloom on your own farm, use the Michigan State University Enviroweather grape berry moth model to have a more precise prediction for control dates for either second generation or third generation grape berry moth. Third generation egglaying occurs 1,620 GDD (base 47 F) after bloom of wild grapes, and that target period is still some weeks away.

Japanese beetle adults and feeding damage on leaf shoots have recently been observed across the state and numbers will likely increase over the coming weeks.

Damage from thrips has also been observed throughout south western vineyards. As the berries develop, the thrips symptoms become visible and are characterized by brown, elongated corky scars, sometimes causing the berry to crack and the seeds to protrude out of the fruit (see photo above).

For southwest Michigan, both Berrien and Van Buren counties were scouted on July 15 and 16 and several diseases were observed. In northwest Michigan, both Leelanau and Old Mission Peninsulas were scouted as well. In both the southwest and northwest portions of the state, disease pressure is high in certain areas and is expected to increase significantly over the next two weeks. This entire season has been characterized by some northwest growers as a long-term infection period and challenges are expected.

In the southwest, significant black rot and phomopsis pressure was observed in Lawton, Michigan. Black rot (caused by Guignardia bidwellii) is a potentially devastating fungal disease that can infect the leaves, shoots, berries and cluster stems of grapes. The ideal conditions for black rot infection are temperatures between 70 F and 80 F, when it takes only six hours of leaf wetness for infection to occur.

Black rot appears as small, light brown, roughly circular spots on leaves and appears as dark circular lesions on developing berries. Phomopsis will appear as numerous small dark lesions on both the leaves and shoots of the plant and as browning and decay on fruit. In the northwest, phomopsis was mainly on basal shoots at base of plants (product of pre-trunk thinning congestion) and small lesions on some foliage.

For black rot, it has been shown that before bloom through two weeks after bloom is the most important time period to protect plants. If scouting reveals significant black rot infections, it may be necessary to prevent secondary infections within your field, which requires using a fungicide’s “back action potential.” At this point in the season, effective fungicides would be sterol inhibitors (SI). Sterol inhibitor fungicides, such as Rally and Elite, continue to provide outstanding control of black rot and provide several days of back-action potential. Make sure to use the highest labeled rate when applying fungicides for their back-action capability.

Downy mildew was also observed in this week but due to the hot weather, many of the fruit infections caused by downy mildew have dried out. However, in some locations, growers may also see actively sporulating downy mildew depending on how humid a particular field has been recently. The causal pathogen (Plasmopara viticola) overwinters as microscopic oospores in leaf debris on the vineyard floor which, in the spring, serve as the primary inoculum and germinate in water to form sporangia. Several cultural control strategies are available, but anything that reduces pathogen inoculum will reduce the infection risk.

One important thing to note about downy mildew is that it is chemically controlled entirely differently than other fungal diseases (meaning different FRAC codes). To review some of these fungicides for downy mildew control, see our update from July 3, 2019. In the northwest, reports of limited outbreaks of downy mildew have been made which is an indication that applications missed the infection period.