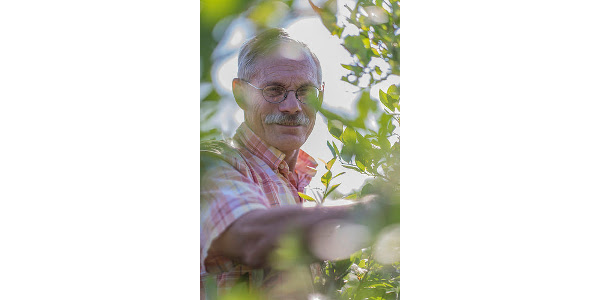 The blueberry varieties developed by Michigan State University (MSU) AgBioResearch fruit breeder James Hancock continue to have a significant impact on the blueberry industry in both Michigan and around the world. (Courtesy of MSU)

EAST LANSING, Mich. — The blueberry varieties developed by Michigan State University (MSU) AgBioResearch fruit breeder James Hancock continue to have a significant impact on the blueberry industry in both Michigan and around the world.

“The first time I went to a field where they had acres upon acres of one of my varieties planted was a pretty emotional experience,” Hancock, who first began blueberry breeding in the early 1990s, recalls. “I worked on the original varieties for about 12 years, and seeing them grown in so many places today is really hard to describe. It’s a heck of a feeling.”

Despite the significance his varieties have had on the blueberry industry, which generates approximately $720 million annually according to the U.S. Department of Agriculture (USDA), Hancock never set out to become a plant breeder. While Hancock spent his early years at MSU searching for useful traits in natural populations of strawberries and blueberries, he saw the importance of plant breeding while working with two key figures in the field – University of California, Davis strawberry breeder Royce Bringhurst and USDA blueberry breeder Arlen Draper. When Draper neared retirement with no clear successor, Hancock decided to fill the void.

“During my training and early career, I had seen what a plant breeder could do for farmers,” Hancock said. “When Arlen was getting ready to retire and it wasn’t clear there was going to be such a focused effort on blueberry breeding at the USDA, the time came when I decided I didn’t want to just study these plants, I wanted to make my own.”

Hancock began by identifying two major issues concerning Michigan blueberry growers. First, most of Michigan’s blueberry acreage was dedicated to a single cultivar, which did not last very long in storage. This meant the blueberry market became flooded at harvest time, but the fruit did not last. Second, Hancock noted Michigan blueberries were harvested toward the end of the national blueberry season, commanding a higher price because they were available after blueberries from other sources nationwide were no longer available. The later the blueberries appeared, the less competition they faced and the more beneficial they were to both growers and consumers.

To address these issues, Hancock focused his early breeding efforts on developing late-season varieties. Two of them, Aurora and Liberty, matured much later than other blueberries, giving Michigan growers an advantage in the marketplace. The third, Draper, was harvested only slightly later than the predominant cultivar at the time, but lasted much longer in storage.

“Dr. Hancock’s research advancements in the plant-breeding program at MSU over the course of his career are destined to have long-lasting, industry-serving, monumental impacts on Michigan’s blueberry industry,” Kevin Robson, executive director of the Michigan Blueberry Commission, said. “Dr. Hancock’s introduction of Aurora and Liberty has aided in the successful lengthening of Michigan’s harvest season. Those particular varieties, coupled with the adoption of innovative short-term controlled atmosphere storage techniques, position our growers to have better returns from the marketplace, given that they outlast their competitors in delivering fruit to markets.

“Along with those late-season varieties, Dr. Hancock’s introduction of Draper has the ability to be mechanically harvested for the fresh market, though if growers have ample labor, they prefer the optimum quality that comes from being handpicked.”

After the release of Aurora, Liberty and Draper, Hancock turned his attention to developing cultivars to fill the remainder of the blueberry-growing season. This resulted in Calypso and Osorno, which mature shortly after Draper, and Huron, which matures earlier. These cultivars have seen success from growers in the Pacific Northwest.

Despite Hancock’s retirement from MSU in December, he still has more to give to the blueberry industry. He is continuing to evaluate one final cultivar, which he began during his last years at MSU, and his existing varieties will fuel the blueberries of the future. Since 2004, Hancock’s cultivars have generated over $10 million for MSU as intellectual property, and a significant portion of that money goes right back into supporting more research.

“The blueberry-breeding program at Michigan State University is an excellent modern embodiment of the great land-grant university tradition,” Richard Chylla, executive director of MSU Technologies, said. “Royalties earned by MSU through the licensing of blueberry varieties were reinvested in the blueberry-breeding program, supporting the development of more improved varieties. The reinvestment in the program has had a worldwide impact, not just in the state of Michigan.”

Some of the licenses for the use of Hancock’s varieties were granted to other breeding programs, which have now released their own varieties with the MSU cultivars as parents.

“Not only have our varieties been successful as crops, but now also as the parents of the next generation of blueberries,” Hancock said. “When I started this process all those years ago, I never imagined that our work would generate this level of impact. I just wondered if we could put these traits together into a good variety. Then we did that, and it just kept getting bigger and bigger.”