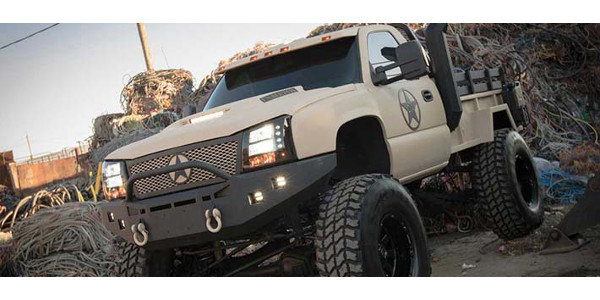 The DieselSellerz are partnering with the Minnesota Soybean Research & Promotion Council (MSR&PC) to promote biodiesel. (Courtesy of MSR&PC)

MANKATO, Minn. — The DieselSellerz, stars of Discovery’s hit show “Diesel Brothers,” could be adding “bio” to their title after teaming up with Minnesota soybean farmers. That’s because the DieselSellerz are partnering with the Minnesota Soybean Research & Promotion Council (MSR&PC) to promote biodiesel.

The DieselSellerz, comprised of “Diesel Brothers” Dave Sparks, aka Heavy D, “Diesel Dave” Kiley, Josh Stuart (Redbeard) and Keaton Hoskins (The Muscle), will take on the task of building a biodiesel truck for MSR&PC, with the build set to air during a future episode on Discovery.

“Farmers are hurting nationwide,” says MSR&PC Chairman Keith Schrader. “In Minnesota, we depend on the extra 63 cents a bushel biodiesel adds to soybeans. We’re proud of this fuel, and we want all Minnesotans to be proud of this fuel. Partnering with the DieselSellerz helps us showcase biodiesel on a state and national level.”

The DieselSellerz will make appearances Aug. 2 at Farmfest near Morgan, Minn., and at the 2018 MN Ag Expo in Mankato, Minn., where the Minnesota biodiesel truck will be unveiled.

Sparks says he likes the science behind biodiesel and is excited for the build.

“Biodiesel is something I have been interested in for quite some time,” Sparks says. “Years ago when the price of diesel fuel was extremely high, I began to plan a way to make my own ‘homebrew’ biodiesel fuel to power my personal truck. I put those plans on hold when the cost of diesel fuel went back down but the concept of renewable fuel has intrigued me ever since. I am beyond excited to work with the MSR&PC to show the world that there are many options to power your diesel vehicle outside of fossil fuels.”

The partnership is part of a larger awareness campaign MSR&PC is embarking upon to tout the benefits of biodiesel in Minnesota.

“Biodiesel contributed roughly $1.7 billion to the state’s economy last year,” Schrader says. “And it’s tough on air pollution. Increasing to a 20 percent blend of biodiesel in the state would be like removing the emissions from nearly 202,000 vehicles. Biodiesel is just a good fuel for Minnesotans.”

About MINNESOTA SOYBEAN RESEARCH & PROMOTION COUNCIL
The Minnesota Soybean Research & Promotion Council (MSR&PC) is the elected board of soybean producers from Minnesota who direct investments of the state’s checkoff dollars in program designed to increase profitability to Minnesota soybean farmers.

About DIESELSELLERZ
DieselSellerz.com is the world’s largest Diesel Truck classifieds community! Buyers and sellers from all over the world come here for Diesel Trucks and Parts both new and used. We dedicate our site strictly to Diesel Trucks so you don’t have to sort through a boatload of Honda Accords or minivans to find that extremely rare truck you’ve been looking for. We’ve also been known to giveaway a lot of diesel trucks for FREE through our Diesel Truck Sweepstakes!

What to know about the Iowa Corn Cy-Hawk Series
September 9, 2022