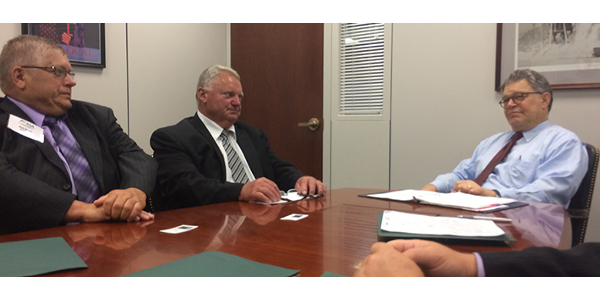 WASHINGTON, D.C. — Lawrence Sukalski is reaching the end of nine years as an American Soybean Association (ASA) director. His last round of Capitol Hill visits in Washington D.C. last week were a little bittersweet, he admits.

“It really is an honor to walk the halls of Capitol Hill and talk to legislators,” the Martin County farmer and Minnesota Soybean Growers Association (MSGA) director says. “They really affect ag policy, and I’ve enjoyed talking with them throughout the years. I’m going to miss that.”

Sukalski, along with a host of other MSGA leaders and Minnesota ASA directors, spoke with 10 legislators and assistants during a round of Capitol Hill visits tour in the nation’s capital.

The status of the next Farm Bill, in particular, was on the minds of both the politicians and farmers.

“It’s too early to know what’s going to happen with the Farm Bill,” Rep. Collin Peterson says. “It’s going to be a challenge, but we’re sure going to try.”

Rep. Tim Walz, who’s also running for Minnesota governor in 2018, said he hopes both parties can find a common ground. Otherwise, he says it’s possible the current Farm Bill may be extended.

Sen. Al Franken believes the current farming economic climate should be considered when drafting the bill.

“We have to write a bill that’s cognizant of today’s low commodity prices,” he says.

“This is a pretty awe-inspiring place,” he says. “There’s so much history here, and you can feel it when you sit down with the legislators.”

Walz, Peterson, Klobuchar and Franken all issued their support for extending the biodiesel tax credit –”it’s crazy not to,” Franken says –  which would shift from a blender’s credit to a producer’s credit.

“Moving the credit to a producer’s credit would save the government millions of dollars, and keep that money in the United States,” says MSGA Director Joel Schreurs. “The way it is now, we’re subsidizing our competitors.”

“We had a lot of policy-specific discussions with them, and we were able to bring our concerns and interests directly to the legislators,” he says. “They definitely know where MSGA stands on the issues important to Minnesota soybean farmers.”