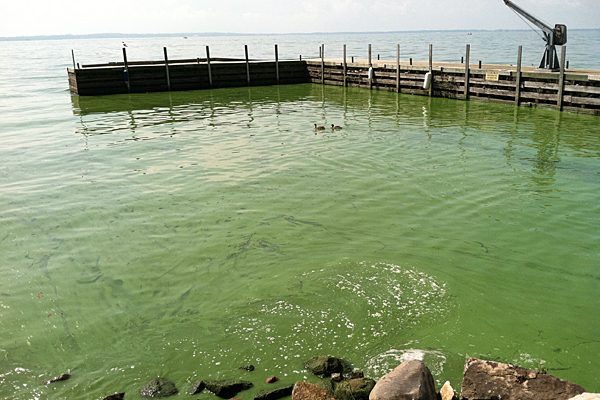 LANSING — Last summer, when I was just another Michigander enjoying the beaches in my hometown up north, I would hear about the algal blooms down in the Western Lake Erie Basin and wonder, “Why haven’t they taken care of that by now?” (“They” being anybody who needed to do something or the people who needed to make those other people do the things they weren’t doing.)

I must admit, there was a slight chance I had oversimplified the issue. OK, I absolutely oversimplified the issue. I felt like Oscar Rogers, the short-lived Saturday Night Live character who joined the Weekend Update team in 2008 as its new financial expert. Oscar was charged with solving the nation’s massive financial crisis. Surprisingly, his solution was quite simple: “Take it one step at a time. Identify the problem—FIX IT! Identify another problem—FIX IT! Repeat as necessary until it’s all FIXED!”

American economist Malcolm Forbes would have told Oscar, “It’s so much easier to suggest solutions when you don’t know too much about the problem.” The same could have been said about my views on Lake Erie.

Still, at the risk of oversimplifying the issue again, I’m going to try to summarize the issue and explain why things aren’t as simple as they may seem.

What We Know for Sure

This is the easiest part. There are algal blooms occurring in Lake Erie. Some of the blooms are bad. Some of the blooms are really bad. The really bad ones contaminate drinking water, harm fish and aquatic life, and prohibit recreation in the area. It would be great if we could prevent the really bad ones from happening. And it would be even better if we could prevent all of them from happening. At the time of this blog post, there is no debate about this. Unless, of course, there is a radical pro-algal-bloom group out there somewhere. If there is, they need to work on their SEO.

What We Think We Know

At this point, it’s safe to say we know what the main causes of the algal blooms are. They are (1) wastewater treatment deposits, including septic, and (2) nutrient run-off from agriculture (specifically, phosphorus; even more specifically, dissolved reactive phosphorus). The working theory is that if the states surrounding Lake Erie can tighten restrictions on wastewater and adopt certain agricultural practices, then Lake Erie can return to a healthy balance of algae, and the blooms will be prevented.

Regarding agriculture’s contribution to the problem, most people agree that there isn’t just one thing that farmers can do to provide a solution—it is multifaceted, complex, and will require time, money, and research.

“For starters, there are infrastructure issues that need to be addressed,” said Joe Kelpinski, manager of the Michigan Agriculture Environmental Assurance Program, a voluntary program for Michigan farmers. “What makes that area habitable are all the tile drains that were installed decades ago, which allows water to flow more quickly off the farmland, so nutrients are getting washed into the drains and into the rivers.” (Read more about the Great Black Swamp in Part 3 of this blog series.)

As described in this video from the Great Lakes Protection Fund and The Nature Conservancy, “This 19th Century infrastructure is now dealing with 21st Century challenges. Global population is rising, and agriculture is intensifying production to meet increasing food demand. Couple that with changing weather and the result is more agricultural drain water moving faster through the landscape.”

Without getting too far into the weeds, one study showed that using something called “blind inlets” rather than tile risers reduced phosphorus loads by an average of 78 percent, and average sediment loads were 79 percent lower.

So, even as researchers continue to search for answers that will help farmers implement even more best management practices, there are a handful of things currently being adopted to help address the problem.

Watch for Part 2 of this blog series, “What We Know We Don’t Know,” in which the author discusses how some of yesterday’s solutions may actually be some of today’s problems.