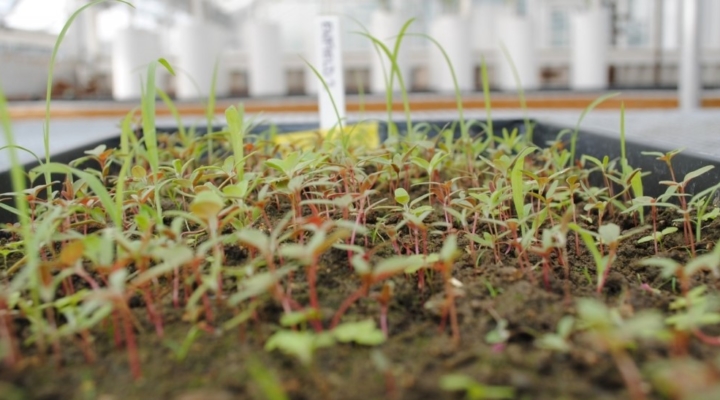 DURHAM, N.H. — Scientists from Maine, New Hampshire, and Vermont have completed the first comprehensive assessment of weeds found on organic vegetable farms in Northern New England. The collaborative, three-state study is an important first step in providing a baseline for organic growers who could face challenges providing locally grown produce because of new, problematic weeds emerging due to environmental change.

“We are living in a period of rapid and to some extent unpredictable environmental change, brought about by a variety of natural and human-mediated factors, including climate change, production practices, technological advances, and others. The purpose of this project was to establish a baseline assessment of the weed problems facing organic vegetable growers in the Northern New England region as a basis for detecting and predicting the evolutionary emergence of new, problematic weeds,” said New Hampshire Agricultural Experiment Station researcher Dr. Tom Davis, professor of genetics at the University of New Hampshire.

“Even weeds that are currently rare or non-existent in certain areas of our region may become more prevalent in the future due to changes in our environment, and those should be of concern to any farmer, whether they are organic or not,” said experiment station researcher Dr. Richard Smith, associate professor of natural resources and the environment at UNH.

This research was funded by the Northern New England Collaborative Research Funding Program, a partnership of the Maine Agricultural and Forest Experiment Station, New Hampshire Agricultural Experiment Station, and the Vermont Agricultural Experiment Station. The three station directors initiated the program with a goal to catalyze coordinated research on high-priority needs for the Northern New England region in experiment station mission areas, of significant importance across the three states. A second objective was to incentivize faculty at the three institutions to explore opportunities for ongoing cross-institutional research synergies.

The Northern New England region of Maine, New Hampshire, and Vermont encompasses a large degree of climate and soil variation across a relatively small spatial area, making it ideal for studying climate and other environmental change impacts on agricultural weed communities.

Scientists sampled weed seedbanks and measured soil physical and chemical characteristics on 77 organic farms across the region. They then analyzed the relationships between weed community parameters and select geographic, climatic, and soil variables. They found temperature-related variables such as latitude, longitude, and mean maximum and minimum temperature were the strongest and most consistent correlates with weed seedbank composition.

The analyses also indicate that a number of agriculturally important weed species are associated with specific U.S. Department of Agriculture plant hardiness zones, implying that future changes in climate factors that result in geographic shifts in these zones will likely be accompanied by changes in the composition of weed communities and therefore new management challenges for farmers.

Finally, researchers found that at least some weed species in the region are much more genetically diverse than had been previously recognized. Some of these species may actually have positive economic potential.

Specifically, scientists identified 113 weed species in soil seedbank samples collected across the 77 farms. The most abundant weed species, in terms of total number of seedlings that emerged from the seedbank samples, were from highest to lowest: slender rush, hairy galinsoga, common purslane,Veronica spp., common lambsquarters, redroot pigweed, large crabgrass, and low cudweed. Together these accounted for nearly 73 percent of the total seedlings that emerged from the samples.

According to the USDA’s most recent Certified Organic Survey released in 2017, the total value of sales of organic vegetables in Maine, New Hampshire, and Vermont is $23.2 million. “Weeds continue to be one of the most difficult management challenges that organic farmers face. Our research has not only provided a much clearer picture of the weed species present in our region, it has also provided farmers with a ‘heads up’ in terms of which particular weeds they can expect to see more (and also less) of in the near future. Such information is useful to both farmers and researchers who are trying to develop new and more effective management strategies for dealing with weeds,” Smith said.