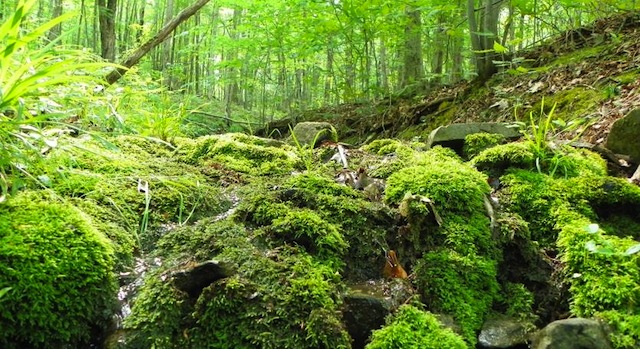 One of the joys of walking in forested areas is seeing all the beautiful mosses. It seems so peaceful and relaxing. Moss is a true “evergreen”.  As soon as the snow melts there it is, green and lush, and it stays that way until covered with snow again. It will go dormant if the weather becomes hot and dry but comes back after a rain. (Photo: Colleen Cavagna)

BELMONT, N.Y. — Moss is a much maligned yet magnificent plant. We get a lot of calls on the Master Gardener Helpline about how to get rid of moss in their lawn. I always try and convince callers of the good features of moss and wish more people could appreciate moss as it is a fascinating plant.

Moss is an ancient plant. It evolved from algae and was the first plant to be able to grow on solid ground. Moss is extremely different from other plants because it doesn’t have roots, leaves, flowers, seeds or branches. Its botanical name is Bryophyte which comes from Greek Bryophyta: bryo- meaning moss and -phyte meaning plant. The basic difference between mosses and other plants is moss lacks a vascular system. That would be like people not having a circulatory system. Moss doesn’t have the ability to transport water or nutrients throughout its foliage. So how does it stay alive?

Without roots to carry water and nutrients moss has developed the ability to absorb all the water and nutrients it needs from the air. It grows in moist shady areas where there is more moisture in the air. So how do they stay put without roots? They have specially adapted structures called rhizoids that enable them to adhere to surfaces. Moss is easily disturbed however, as anyone who has raked leaves from a mossy area has found out. The disturbed moss patches can be put back easily and stepped on with light pressure to re-establish contact with the ground.

There are more than 12,000 species of moss growing throughout the world in a wide variety of habitats including the arctic cold and hot deserts. Because they don’t depend on roots to take up water, they can live on rocks, trees, clay and even under water!  Most moss grows from less than an inch high to 20 inches for the largest. They live from 1 to 10 years depending on the variety. Not producing seeds, moss spread through division and air borne spores.

One of the joys of walking in forested areas is seeing all the beautiful mosses. It seems so peaceful and relaxing. Moss is a true “evergreen”.  As soon as the snow melts there it is, green and lush, and it stays that way until covered with snow again. It will go dormant if the weather becomes hot and dry but comes back after a rain.

For these reasons moss gardening is one of the newest trends in horticulture. Given the right habitat it’s easy to grow, low maintenance and beautiful. What’s not to like? Many people who have given up trying to grow grass in shady areas are turning to moss. It’s an excellent alternative. Normal foot traffic is OK but moss wouldn’t be a good choice for an area where children are playing as it tears up too easily. The easiest way to include moss in your lawn is to encourage the moss that is already there by removing other vegetation that is impeding its growth. That’s what I have been doing and it works. There are also recipes online for making a moss “slurry” with moss and buttermilk or beer to encourage moss growth. Since moss is becoming so popular there are nurseries that specialize in moss that can be mail ordered.

Over the centuries moss has been used for many things. Sphagnum moss is the main ingredient in peat moss. Because it is extremely absorbent and can absorb up to 20 times its weight and has anti-bacterial properties, moss was used as bandages throughout history including during WWI. Dried moss was used as an insulation in homes and to keep feet dry in boots as well as fuel for heat. Moss also has an important ecological role; it is a bioindicator for pollution (in polluted areas, it changes shape, density or just disappears completely), conserves water, prevents erosion, filters pollution and acid from rain and sequesters carbon.

Don’t be so quick to try and get rid of the moss in your landscape. Give moss a chance, it will add beauty to your garden.

Safe gardening grows your mindfulness
May 14, 2020