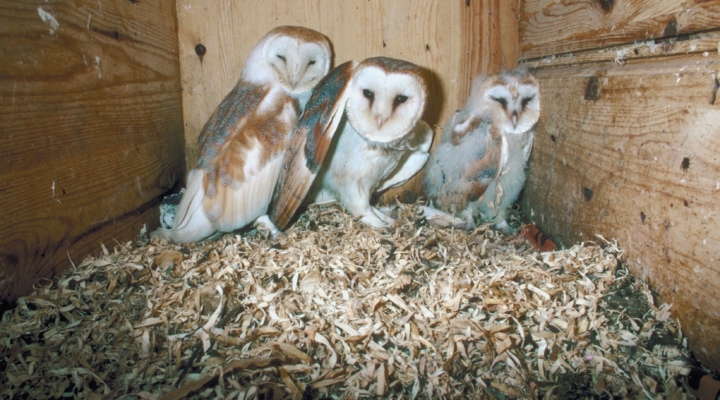 Barn owls make their homes in boxes put up by farmers in South Florida. The growers like the owls because they eat rodents that would otherwise munch on their sugarcane, sweet corn and rice. (photo courtesy, Getty Images)

GAINESVILLE, Fla. — Barn owls make their homes in boxes put up by farmers in South Florida. The growers like the owls because they eat rodents that would otherwise munch on their sugarcane, sweet corn and rice.

Researchers with the University of Florida Institute of Food and Agricultural Sciences have found that mosquito bites can contribute to the deaths of the beneficial barn owls. But scientists also found they can use the insecticide permethrin to ward off the mosquitoes that prey on little barn owls – known as “nestlings.”

When UF/IFAS researchers put permethrin inside the nest box, the number of mosquitoes went down – without negatively impacting the little owls. Permethrin is effective at repelling and killing a variety of arthropods, said Caroline Efstathion, a scientist who led the study when she was a Ph.D. student at the UF/IFAS College of Agricultural and Life Sciences (CALS).

“It actually increased their survival rate compared to nestlings in boxes with no insecticide,” said Efstathion, who did her doctoral work at the UF/IFAS Fort Lauderdale Research and Education Center. “This is important because there are several endangered birds whose populations are declining from botflies and other biting insects. We hope permethrin can be used to benefit these species.”

Barn owls, whose populations are declining worldwide because of habitat alterations and the lack of nesting sites, thrive in South Florida because farmers have installed nest boxes for them, according to UF/IFAS research. Growers, especially those who produce sugarcane in the Everglades Agricultural Area (EAA), use barn owls to reduce rodent populations and damage in their crops. The 700,000-acre EAA encompasses an area near Lake Okeechobee.

For the study, scientists attached mosquito traps to boxes where barn owls nested in sugarcane fields, said Nathan Burkett-Cadena, a UF/IFAS assistant professor of entomology, and a co-author on the study. With the traps, researchers caught up to 3,193 mosquitoes in one box one night, suggesting that nestling owls (the young ones) get bitten a lot at night, said Burkett-Cadena, a faculty member at the UF/IFAS Florida Medical Entomology Laboratory in Vero Beach, Florida.

Efstathion, a CALS doctoral alumna studying entomology and nematology, conducted her Ph.D. work under the supervision of UF/IFAS entomology associate professor Bill Kern, another study co-author. The new UF/IFAS study is published in the Journal of Wildlife Diseases.

Young rancher credits UF/IFAS Extension for much of her success
February 25, 2020