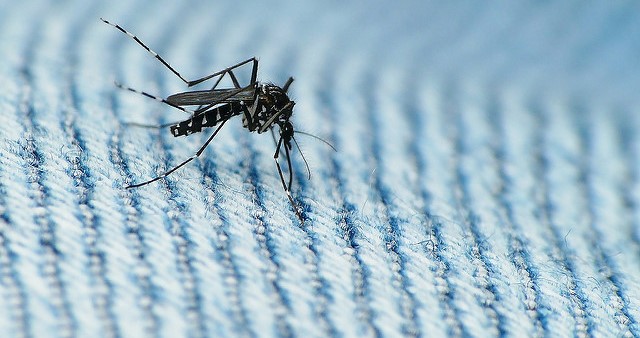 “Mosquitoes transmit disease-causing pathogens that affect humans and wildlife. Mosquitoes are the most dangerous animals to humans,” said Lawrence Reeves, a post-doctoral researcher at the UF/IFAS Florida Medical Entomology Lab in Vero Beach, who led the study. (coniferconifer, Flickr/Creative Commons)

GAINESVILLE, Fla. – For the first time in more than 100 years, researchers have found that a species of mosquito feeds on the blood of earthworm and leeches, instead of frogs and toads like most other species. A study by University of Florida Institute of Food and Agricultural Sciences researchers demonstrates that mosquitoes take blood from a wider range of animals than previously understood, which may have implications for human health.

“Mosquitoes transmit disease-causing pathogens that affect humans and wildlife. Mosquitoes are the most dangerous animals to humans,” said Lawrence Reeves, a post-doctoral researcher at the UF/IFAS Florida Medical Entomology Lab in Vero Beach, who led the study. “Each mosquito species feeds on certain types of animals, but no mosquito species studied to date has been found to specialize on the blood of invertebrate animals—worms and leeches.”

According to Reeves, managing the impact of diseases transferred by mosquitoes is one of the greatest challenges facing researchers and doctors. “So, it is critical to understand which mosquitoes feed from which host animals because this determines how pathogens are likely to move through an ecosystem, and how humans may be impacted,” he said.

For the study, Reeves and his team collected blood-fed mosquitoes from multiple locations on the Florida Peninsula—from Columbia, Alachua, Indian River and Miami-Dade counties. Scientists used DNA, extracted from the mosquitoes’ blood meals, and a technique called DNA barcoding to determine what animals the mosquitoes were feeding on.

“The study demonstrates that the range of potential mosquito hosts is considerably broader than previously indicated,” Reeves said. “And, because previous research on mosquito-host interactions assumes that mosquitoes only feed on vertebrate animals, it is currently impossible to know how widespread invertebrate feeding is, or how this might impact the transmission of pathogens. This study really highlights that we still have much to learn about mosquitoes.”

For example, field-collected mosquitoes that feed exclusively on worms and leeches have tested positive for the Eastern equine encephalitis virus and the West Nile virus, Reeves said. “Our results suggest that Uranotaenia sapphirina is unlikely to become infected with these viruses by feeding from worms,” Reeves said. “It is possible that by feeding upon leeches, which themselves may feed on virus-infected animal hosts, this mosquito could come into contact with these viruses.”

The study will be published in Communications Biology.