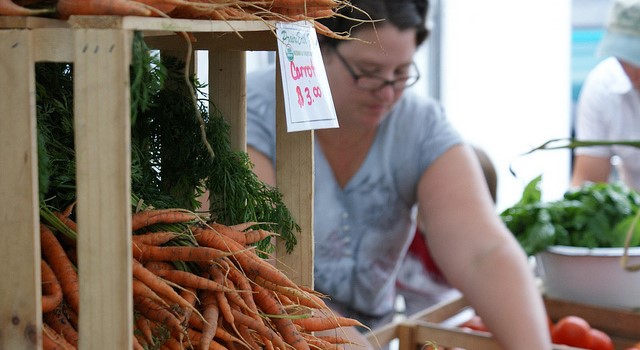 The number of young farmers entering the field is still nowhere near enough to replace the number exiting, according to the USDA: Between 2007 and 2012, agriculture gained 2,384 farmers between ages 25 and 34 — and lost nearly 100,000 between 45 and 54. (Gemma Billings, Flickr/Creative Commons)

The hours were better at her nonprofit jobs. So were the benefits. But two years ago, the 32-year-old Whitehurst — who graduated from a liberal arts college and grew up in the Chicago suburbs — abandoned Washington for this three-acre farm in Upper Marlboro, Md.

She joined a growing movement of highly educated, ex-urban, first-time farmers who are capitalizing on booming consumer demand for local and sustainable foods and who, experts say, could have a broad impact on the food system.

For only the second time in the last century, the number of farmers under 35 years old is increasing, according to the U.S. Department of Agriculture’s latest Census of Agriculture. Sixty-nine percent of the surveyed young farmers had college degrees — significantly higher than the general population.

This new generation can’t hope to replace the numbers that farming is losing to age. But it is already contributing to the growth of the local-food movement and could help preserve the place of midsize farms in the rural landscape.

“We’re going to see a sea change in American agriculture as the next generation gets on the land,” said Kathleen Merrigan, the head of the Food Institute at George Washington University and a deputy secretary at the Department of Agriculture under President Barack Obama. “The only question is whether they’ll get on the land, given the challenges.”

The number of farmers age 25 to 34 grew 2.2 percent between 2007 and 2012, according to the 2014 USDA census, a period when other groups of farmers — save the oldest — shrunk by double digits. In some states, such as California, Nebraska and South Dakota, the number of beginning farmers has grown by 20 percent or more.

A survey conducted by the National Young Farmers Coalition, an advocacy group, with Merrigan’s help shows that the majority of young farmers did not grow up in agricultural families.

They are also far more likely than the general farming population to grow organically, limit pesticide and fertilizer use, diversify their crops or animals, and be deeply involved in their local food systems via community supported agriculture (CSA) programs and farmers markets.

Today’s young farmers also tend to operate small farms of less than 50 acres, though that number increases with each successive year of experience.

Whitehurst bought her farm, Owl’s Nest, from a retiring farmer in 2015.

The farm sits at the end of a gravel road, a series of vegetable fields unfurling from a steep hill capped by her tiny white house. Like the farmer who worked this land before her, she leases the house and the fields from a neighboring couple in their 70s.

She grows organically certified peppers, cabbages, tomatoes and salad greens from baby kale to arugula, rotating her fields to enrich the soil and planting cover crops in the offseason.

On Tuesdays, Thursdays and Fridays, she and two longtime friends from Washington wake up in semidarkness to harvest by hand, kneeling in the mud to cut handfuls of greens before the sun can wilt them. All three young women, who also live on the farm, make their living off the produce Whitehurst sells, whether to restaurants, through CSA shares or at a D.C. farmers market.

Finances can be tight. The women admit they’ve given up higher standards of living to farm.

“I wanted to have a positive impact, and that just felt very distant in my other jobs out of college,” Whitehurst said. “In farming, on the other hand, you make a difference. Your impact is immediate.”

That impact could grow as young farmers scale up and become a larger part of the commercial food system, Merrigan said.

Already, several national grocery chains, including Walmart and SuperValu, have built out local-food-buying programs, according to AT Kearney, a management consulting firm.

Young farmers are also creating their own “food hubs,” allowing them to store, process and market food collectively, and supply grocery and restaurant chains at a price competitive with national suppliers.

“I get calls all the time from farmers — some of the largest farmers in the country — asking me when the local and organic fads will be over,” said Eve Turow Paul, a consultant who advises farms and food companies on millennial preferences. “It’s my pleasure to tell them: Look at this generation. Get on board or go out of business.”

There are also hopes that the influx of young farmers could provide some counter to the aging of American agriculture.

The age of the average American farmer has crept toward 60 over several decades, risking the security of midsize family farms where children aren’t interested in succeeding their parents.

Between 1992 and 2012, the country lost more than 250,000 midsize and small commercial farms, according to the USDA. During that same period, more than 35,000 very large farms started up, and the large farms already in existence consolidated their acreage.

If today’s young farmers can continue to grow their operations, said Shoshanah Inwood, a rural sociologist at Ohio State University, they could bolster these sorts of farms — and in the process prevent the land from falling into the hands of large-scale industrial operations or residential developers.

“Multigenerational family farms are shrinking. And big farms are getting bigger,” Inwood said. “For the resiliency of the food system and of rural communities, we need more agriculture of the middle.”

It’s too early to say at this point whether young farmers will effect that sort of change.

And young farmers face formidable challenges to starting and scaling their businesses. The costs of farmland and farm equipment are prohibitive. Young farmers are frequently dependent on government programs, including child-care subsidies and public health insurance, to cover basic needs.

And student loan debt — which 46 percent of young farmers consider a “challenge,” according to the National Young Farmers Coalition — can strain already tight finances and disqualify them from receiving other forms of credit.

But Lindsey Lusher Shute, the executive director of the coalition, said she has seen the first wave of back-to-the-landers grow up in the eight years since she co-founded the advocacy group. And she suggested that new policy initiatives, including student loan forgiveness and farm transition programs, could further help them.

“Young farmers tend to start small and sell to direct markets, because that’s a viable way for them to get into farming,” Lusher Shute said. “But many are shifting gears as they get into it — getting bigger or moving into wholesale.”

Just last year, Whitehurst was approached by an online grocery service that wanted to buy her vegetables. While Owl’s Nest produces too little to supply such a large buyer on its own, the service planned to buy produce from multiple small, local farmers.

Whitehurst ultimately turned the deal down, however. Among other things, she feared that she could not afford to sell her vegetables at the lower price point the service wanted.

“For now, I’m focused on getting better, not bigger,” she said. “But in a few years, who knows. Ask me again then.”

New features for our readers