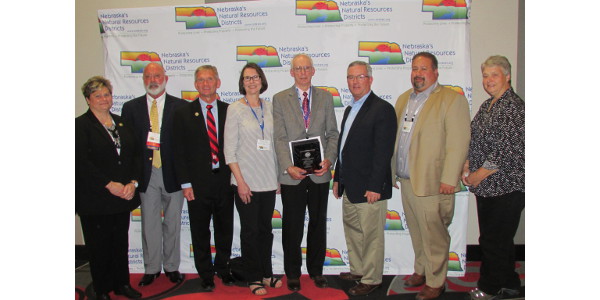 KEARNEY, Neb. — The Nebraska Association of Resources Districts (NARD) Annual Conference was held at the Younes Conference Center in Kearney, September 25th – 26th and focused on protecting lives, property and the future of Nebraska’s natural resources.  This year more than 400 Natural Resources Districts (NRD) managers, staff, board members, conservation partners and the public received new information on many natural resources and agriculture developments and projects going on now.

During the Hall of Fame ceremony, three individuals were inducted into the Natural Resources Hall of Fame. They include Dean Rasmussen from North Loup who’s a longtime board member of the Lower Loup NRD. Ron Fleecs from Beatrice is a retired general manager of the Lower Big Blue NRD in Beatrice. The third is Gayle Starr who’s originally from Clay County. He currently lives in Lincoln. He is a retired division head of the Nebraska Natural Resources Commission after assisting in creating the Natural Resources Districts in 1972. This is the NRDs’ 45th Anniversary.

“The inductees of the Natural Resources Districts Hall of Fame have spent their lifetimes working to make sure future generations will be able to enjoy the beauty and resources of this state just as we are today,” said Bendfeldt.

Join us at Williams IA for an Organic Field Day
August 3, 2022