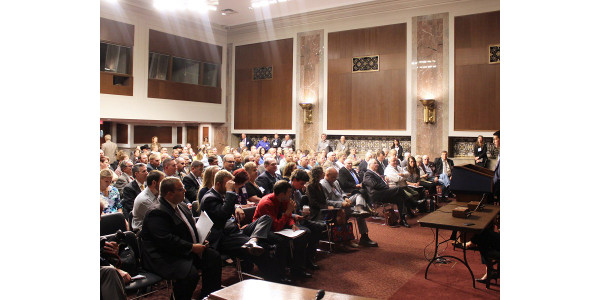 WASHINGTON — On Monday, 320 Farmers Union members gathered in the nation’s capital for National Farmers Union’s Fall Legislative Fly-In. The annual event allows Farmers Union members from across the country to meet directly with lawmakers, USDA leaders and other administration officials to discuss issues important to family farmers and ranchers.

“Times are tough right now for American family farmers and ranchers,” said NFU President Roger Johnson. “And when times get tough for farmers, Farmers Union members step up and advocate.”

“We’ve seen a dramatic, 50 percent drop in farm income over the past four years,” he continued. “At the same time, farmers are enduring major weather volatility due to climate change, uncertainty over foreign trade markets, massive consolidation of farms and agribusiness companies, and the ongoing degradation of farming and rural community infrastructure and services. The men and women who feed and fuel our nation need the support of their elected leaders, and that’s why 320 of them took four or five days out of their busy fall schedules to advocate at our Fly-In.”

NFU Fly-In participants are in Washington to lobby their elected officials on legislative solutions to issues that heavily affect their farming and ranching operations.

“Congress has a long list of issues to deal with this fall, and we want to make sure they’re considering the social and economic well-being of American family farmers and ranchers with every vote they cast,” said Johnson. “NFU members are especially concerned about the prospect of an adequate farm safety net through the 2018 Farm Bill, bipartisan health care system fixes that ensure accessible, affordable, quality health care, and expanded markets for American grown, renewable fuels, including E30 and advanced biofuels.”

Informational sessions will continue this afternoon, as Fly-In participants meet with U.S. Senate and House of Representatives agriculture committees’ staff members to gain insight into the committees’ fall agendas. NFU members will then take to Capitol Hill on Tuesday and Wednesday to meet in small-group meetings with all 535 congressional offices, and to present 33 members of Congress with the Golden Triangle Award, the group’s highest legislative honor.

Livestock not eating your food