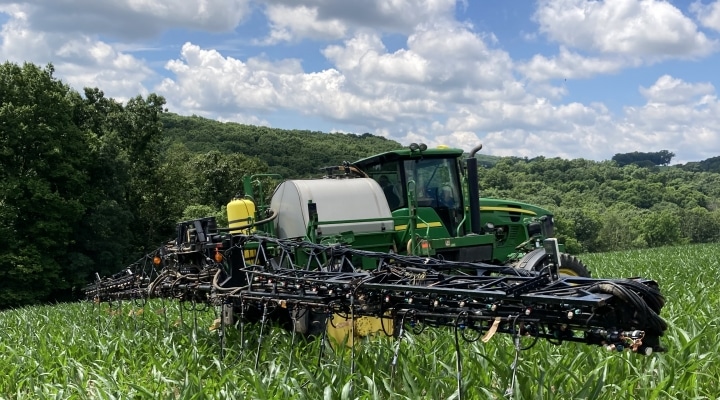 Researchers in Penn State’s College of Agricultural Sciences have developed an important component of a new system that corn growers can use to adjust nitrogen fertilizer applications based on site-specific measurements of cover crops and soil organic matter. (photo by Zack Sanders, Penn State University)

UNIVERSITY PARK, Pa. — Researchers in Penn State’s College of Agricultural Sciences have developed an important component of a new system that corn growers can use to adjust nitrogen fertilizer applications based on site-specific measurements of cover crops and soil organic matter.

The development is notable because while the wide use of cover crops in rotations with corn in the last decade has resulted in reductions in nutrient pollution and sedimentation, the introduction of cover crops has muddled growers’ decision-making regarding how much nitrogen fertilizer to apply to meet their cash crop demands.

“Around the world, we have a lot of nitrogen pollution from agriculture coming from fertilizers or manure usage,” said researcher Charlie White, assistant professor and extension specialist in soil fertility and nutrient management. “And it’s not all about farmer mismanagement. A lot of it has to do with a lack of tools available to farmers to accurately predict the correct amount of nitrogen that is needed for crops in any given year.”

The complicating factor, White added, is that on average, half of the nitrogen that is taken up by the corn crop is from the mineralization of nitrogen in soil organic matter. Things get even more complicated for farmers who use cover crops, because the amount of nitrogen mineralized from cover crops depends on the species and how it is managed. Sometimes, cover crops even tie up nitrogen and might require farmers to increase fertilizer for the following corn crop.

Until now, it has been extremely difficult to predict how much mineralization will occur from those sources, he explained, and then account for that mineralization in a farmer’s decision on how much fertilizer to apply.

“The nitrogen recommendation system we have used in the past is crude,” White said. “This is a problem that agronomists, environmentalists and farmers have been aware of for decades. We think that we have made an important step toward solving the problem with a new decision-support tool that credits nitrogen mineralization from cover crops and soil organic matter.”

The system — which includes a prototype online interface available for farmers and agronomists to test at https://extension.psu.edu/nitrogen-recommendations-for-corn — incorporates biogeochemical models that predict the contribution of nitrogen mineralization in supporting the yield of corn. The models are designed specifically to use soil and cover crop measurements that are easily accessible to farmers and agronomists, including soil organic matter concentration, soil texture and cover crop biomass nitrogen content.

Researchers calibrated the models to predict unfertilized corn yield using a dataset of 73 observations compiled from nine experiments conducted at different sites in Pennsylvania. The research included a series of cover crop experiments conducted in central and southeastern Pennsylvania from 2011 through 2014 on commercial farms and at a Penn State research station.

Cover crop treatments were planted in late summer and terminated the following spring, and corn was planted in each field as the summer cash crop. Corn grain yields in unfertilized split-plots then were measured in the fall. Corn yields from cover cropped treatments were used to calibrate the model to predict nitrogen supply from cover crop residues. The results of the research were published recently in Agronomy Journal.

“A lot of the nitrogen losses that we see from our agricultural systems occur because we don’t know how much fertilizer to apply at the beginning of the season,” White said. “So, this work fills a major hole in plant science, soil science and agronomy in terms of being able to better predict the nitrogen that will be supplied from soils and cover crop residues. It gives us a better sense of how much fertilizer we actually may need.”

Also involved in the research were Armen Kemanian, associate professor of production systems and modeling, and Jason Kaye, professor of soil biogeochemistry, both at Penn State; and Denise Finney, assistant professor of biology at Ursinus College near Philadelphia, formerly a member of the research team as a Penn Stare graduate student.

The U.S. Department of Agriculture’s National Institute of Food and Agriculture and the Northeast Sustainable Agriculture Research and Education program funded this research.